“Even as the Light Grows” by The Dark Third – Review 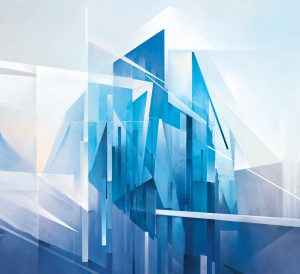 Trying to describe the music on Even as the Light Grows by Auckland art rockers The Dark Third feels very similar to trying to describe the cover art. It showcases many sharp edges while still having an overall smooth feel and when you look deep into the blue you can almost make out a brewing storm. The only things you can be absolutely sure of are that it is exceptionally complex and exquisitely beautiful.

The music here is intricate to the point of being nearly impossible to define, a wonderful quality of art rock. The Dark Third draw the distinct sound from many different styles such as post-rock, metal, shoegaze, and most notably dark progressive. It is an exceptionally well written and unified collection of melancholy and complexity.

The album starts of with opening track and main standout “The Dreams of Lesser Men,” a 13-and-a-half-minute powerhouse that begins with pure discord before fading into a piano riff accompanied by bass. The opening wall of noise actually serves to make the piano a much more notable section of the song than if it had been the intro. It highlights the softness before jumping right back to the more powerful guitars. In the first two minutes, The Dark Third shows off their ability to take incompatible pieces and paint them into a cohesive picture. When Daniel Hay starts singing, he feels like an outside observer narrating what he sees. There is a distinct weightless property to his voice, a breeze indifference that heightens the abrasive atmosphere. The constant polarity between the ethereal and hellish sections of the piece are at no points more notable than around the ten-minute mark, when everything falls out to give way to the piano to calmly play unhindered. This serves as the eye of the storm following the intense intensity prior to it before it builds itself back up to meet the guitars and drums once more in full strength, the gale force winds felt once more. Even as the Light Grows shows itself to be a powerful hurricane with this magnificent opening track that highlights the strengths the band possess.

Following the cacophony, “These Things Are Not Inherent” begins with a driving drum joined by the piano, together forming the backbone of the song. As a result of being less than half the length, the vocals feel much more important on this track than its predecessor. While “The Dreams of Lesser Men” benefits greatly from a stronger focus on instrumentation, this song gains much of its staying power from the focus on vocals. The singing has a spellbinding effect that draws you into the power of the track, like the light of an angler fish, which rather uncomfortably fits the title of the album very well. In addition to this extra layer of talent, the strengths on the opening track are of just as high quality here and the rest of the songs.

It is important to note that this is not an easy album to listen to. The Dark Third unabashedly and unapologetically oppresses you with heavy atmosphere, constant grim themes, sharp shifts in energy, and an charged sense of emotional dread and despair. However, these are also the pieces that make Even as the Light Grows such a good album. It defies all expectations and challenges you to relinquish control and embrace the music.

Final Thoughts: While it can be challenging to listen to, Even as the Light Grows is well worth the effort it takes to love.