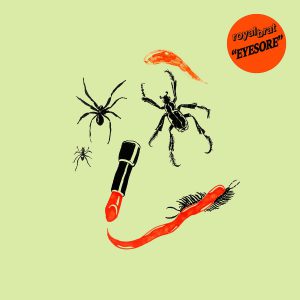 Minneapolis’ Royal Brat bring energy, spunk, and catchiness to the Hardcore music presented on their debut album. Eyesore manages to draw on classic punk influence but is an urgent release for 2018. The songs average less than two minutes, but pack quite a punch. Lyrically, this album is entertaining and fun at times, but also has its finger on the pulse of the contemporary political climate in a very personal, emotional way.

Royal Brat does an excellent job illustrating their skills as both musicians and songwriters. The songs are short bursts of punk rock but are deceptively catchy. The vocals are both snotty in the perfect punk sense, but also charmingly melodic. Singer Alex can pull off nasally yells, like on opening track “Avoider,”  a fun, poppy attitude on songs like “Snowball,” and emotional deliveries on songs like “Salt.” At times his vocals feel like a sober Darby Crash in a higher register. On songs with backing vocals, like “Broken Step,” lo-fi female responses add a frantic urgency.  The guitar work throughout the album is also very captivating. Taking influence from the punk rock school of minimalism, the core of a lot of songs is built around simple and frantic distorted guitar riffs. This is not to say the guitar work on the album is not impressive though. Songs like “Wrist” and “Gut” have subtle guitar arpeggio’s inserted in the riff that really get stuck in your ear. Stand out song “Salt” creates a spacious, almost atmospheric sounding track, with the guitars and backing vocals interacting with each other in an interesting way. Throughout the album, the rhythm section provides an up-tempo backdrop with a variety of beats that help propel the tracks forward.

Lyrically, Eyesore deals with a wide arrange of topics such as identity, gender, sex, life, and trauma. Legendary punk singer Ian MacKaye of Minor Threat and Embrace once famously derided the label emo-core, saying “‘emo-core’ must be the stupidest fucking thing I’ve ever heard in my entire life […] ‘Emotional hardcore.’ As if hardcore wasn’t emotional to begin with.” In accordance to this philosophy, Eyesore is at times a very personal punk record. Songs like “Camisole” and “Salt” deal with themes of identity, being yourself, and strength, “Swim” and “Gut” are sexy bed room tales, and “Virgin” deals with heartbreak. All these lyrics are sung with frantic passion by vocalist Alex.

With Eyesore, Royal Brat have asserted themselves as a band to watch in the future of punk. They use their in-depth understanding of what makes great punk music to create a fresh yet classic-sounding punk album in 2018. Refreshing instrumentation and charismatic vocals drive Eyesore as a remarkable debut.

You can tune in to hear Calder host WPTS Radio’s premier punk show The Electric Bananarama Tuesdays from 6 to 8 PM. This review was edited by Stevie Priller of the WPTS Editorial Board.