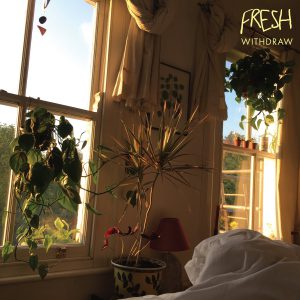 Withdraw is a stunning sophomore accomplishment from U.K. punk four-piece Fresh. This album briskly marches through the curious mind & spirit of vocalist/main songwriter Kathryn Woods, a march that is quite literally a breath of fresh air (pun intended). Bright, jangly guitar riffs overlay fuzzy bar chords, bouncing bass lines, and confident drumming, giving each searing 2 minute ripper the power to demand the listener’s attention from start to finish. The flow from tack to track on this album is impeccable- whether the energy peaks with Woods’ wailing yell or spirals into a single feedback loop, your attention is sure to be kept.

With topics spanning from the male gaze in the music industry to the internal conflict and battle with self love, Withdraw hurtles forward without so much as a moment to reflect on what the previous song was about. The album pivots between moments of frightened exasperation and delirious joy; Woods explores feelings of care and conflict on the album, evaluating intensely the relationships around her and within herself.

This is exemplified on the track “Nervous Energy”, with Woods singing “I’m hungry for something more than food/I’m hungry for you”. Opening up further into the track, however, she sings “Wishing things were back to what they were/feeling suicidal, nobody cares”. This song is immediately followed by the ripping love song (and one of the album’s leading singles) “Going to Brighton,” in which Woods sings “What do you do when you’re stuck between people?/Baby I’d never wanna be with anyone but you/I like the way things come together/I like the way the light hits my bedroom wall”. The most iconic lyrics in the album come with ‘Revenge’ in which Woods croons “I am valued I am loved/I will get revenge on everyone who’s done me wrong”, which builds into a passionate scream by the end of the song.
Consequently, this bold shift exemplifies the fact that Fresh has clearly been hard at work crafting their songwriting abilities between their freshman self-titled LP and Withdraw. The fun & free energy of their previous work still oozes through each bar of music with beautiful, rich harmonies framing the (at times gentle, at times vicious) lyrics on each track.

At first I found myself hesitant to admit that Fresh’s new release was pop-punk. Perhaps it’s just me, but I find the genre has a somewhat nauseating connotation with Hot Topic stores, cargo shorts, and bros with snapbacks/skateboards. Fresh’s vision of a loving, queer, unapologetically honest pop-punk sound is nothing short of a reclamation of the genre.

Indeed, there is no bravado on Withdraw– the record wears its heart on its sleeve. Through all of the angst, tears, and frustration layered into the album, hopeful joy is the end product I’m left with listen after listen. From the distorted, sinking opening track (“Withdraw”) to the inspired, raw, almost forced self-acceptance at the back end of the album (“Revenge”), Withdraw is as nice as a warm hug on a rainy afternoon. If you’re a fan of rock music and only listen to one album this summer, make it this one.