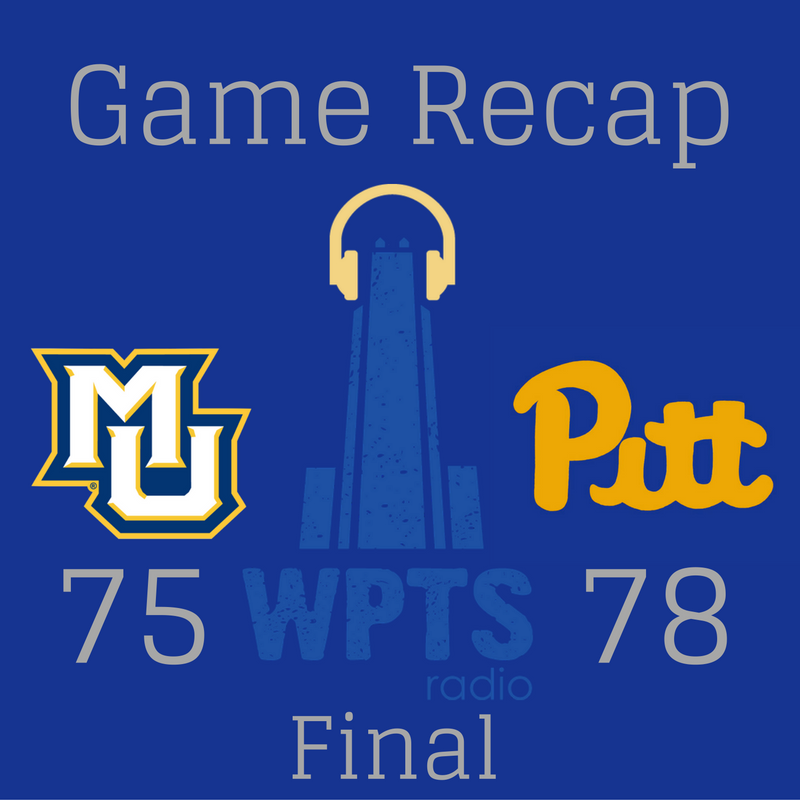 But man, was it needed.

Facing a nine-point deficit and the prospects of going 0-2 here at MSG, the Pittsburgh Panthers (3-1) behind a dominant career night from senior Michael Young (30 points, 11-20 FG, 7-7 FT) overcame four second half double-digit deficits to defeat the Marquette Golden Eagles (2-2), 78-75.

A loss tonight against a middle of the road Marquette team could have been catastrophic for Kevin Stallings senior heavy Pittsburgh squad.

Instead, the Panthers rose to the occasion and put together the teams most impressive regulation half of the young season.

“Our mindset at halftime was that we needed to play harder than them, smarter than them and tougher than them” Michael Young said.

“In the first half we didn’t do any of that”, he continued.

It was a back and forth first half, with both teams enjoying marginal leads during the first 15 minutes.

In fact, neither team enjoyed more than a five-point lead for the first 17 minutes and 10 seconds of the game.

That would quickly change however, as a late charge from Marquette, led by UNC-Ashville transfer Andrew Rowsey (20 points), extend the Golden Eagle lead to nine heading into the half-time break.

“We talked all day and all night about somebody was leaving with a donut, and we didn’t want it to be us” head coach Kevin Stallings said.

Sensing the game slipping away, the Panthers coaching staff knew it needed to come up with a seminal moment.

“One of our [Graduate Assistants] who played at Pitt, who’s got a lot of Pitt Basketball pride in his chest, had a couple of things to say at halftime” Stallings said.

“Ontario Lett used the pride word a few times, and that’s why I think we played better. I don’t think it was anything I said, I think it was what Ontario said, because he got mad and I asked him to say something.”

“At halftime it was a look your self in the mirror type of moment” Young said.

“[We] lost the first game due to [SMU] competing more than us, being tougher than us down the stretch. Coming into the second half it was now or never.”

In the end the Panthers seized the “now or never” moment, outscoring the Golden Eagles 45-31 in the second half, shooting a crisp 60 percent (18-30) from the floor.

In the process, Pitt overcame a 15-point second-half deficit due in large part to the aforementioned Young, who’s 10-0 run, tied the game at 59 with 10 minutes play.

Overall Michael Young averaged 26 points and eight rebounds in the two games at “The Garden”, earning a spot on the all-tournament team in the process.

On the defensive end, Pitt held Marquette to just 9-30 (30%) in the games final half, holding the Eagles off the board for the final 2:24 of the game.

During that stretch Pitt dodged a potential game winning layup from Andrew Rowsey in the closing seconds, a wide-open three from Sam Hauser and a 35-foot last second heave also from Rowsey.

“I’m proud of the way we came through in the end” Kevin Stallings said when he met the media following the game.

“We had some really nice possessions offensively at the end, in addition to our defense. Again on a day where we didn’t [really] make any three [point field goals], we were able to get to the foul line a bunch and do a decent job there. Again just the fact that we played well defensively in the second half was enough to make me happy”

Overall the Panthers leave New York City with a record of three wins and one loss, with a big game against defending Ivy League Champions Yale (who recently defeated Washington on the road), on Tuesday.

At the end of the weekend, Stallings said he learned a few things about his new team.

With bigger games on the horizon, and the season continuing to unfold, senior Michael Young knows that this game tonight might just be a building block for the 2016-17 Pittsburgh Panthers.

“Right before the press conference I told my team that the second half team is the team we need to be every game” he said.

“If we can get to that place where we’re that team for almost 40 minutes a game, the team that you saw down the stretch- when we were getting stops, taking good shots, making big shots knocking down free throws. If we can be that team, we’ll be the team we know we can be.”