Get to Know: Swearin’ and Waxahatchee

While Swearin’ and Waxahatchee are the results of the collaboration of over half-a-dozen musicians, the driving force between these two bands is perhaps the most famous duo in modern indie rock: twin sisters Allison and Katie Crutchfield. The two got their start playing music with each other in their home state of Alabama, originally coalescing and Warp-Touring in high school circa 2006 in the Ackleys, and later rising to the spotlight in P.S. Eliot. Katie Crutchfield sang and played guitar in these two bands, with Allison playing keyboard in the Ackleys and later drums in P.S. Eliot. P.S. Eliot released two fantastic albums, Introverted Romance in our Troubled Minds in 2009 and Sadie in 2011.

The lifetime of P.S. Eliot saw the twins relocating to Philadelphia and New York and Allison’s rise as a songwriter. These changes lead to Allison’s collaborations with northeastern musicians and projects such as twee pop trio dear marje and, eventually, Swearin’, which released its debut EP in 2011. The northeastern migration also saw the birth of Bad Banana, which included the twins, releasing a demo called Crushfield and an EP called Cry About It. While Allison was taking a larger role, Katie began to desire more creative control than she felt appropriate in P.S. Eliot. That band dissolved in 2011, but it was by no means the end of music for the Crutchfield twins. 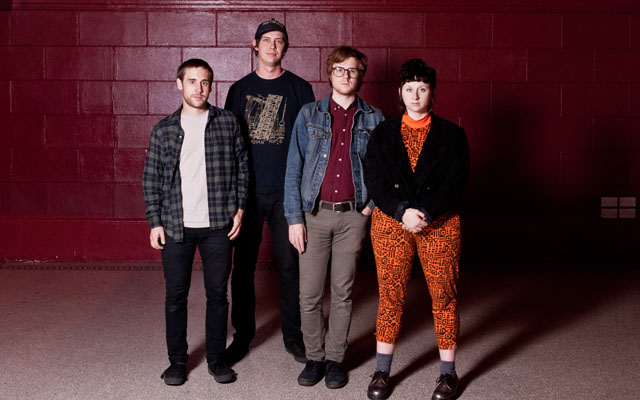 While Katie Crutchfield had previously released a split EP under the name Waxahatchee, 2012 saw a dramatic upheaval which evidently could only be expressed in one of the most earnest, upsetting, and beautiful lo-fi releases of the past decade. American Weekend, written and recorded quickly in isolation back at her parents’ house near Alabama’s Waxahatchee Creek, launched her to the forefront of modern songwriters with its stripped down instrumentation and poetic focus.

Waxahatchee and Swearin’ both represent dramatic departures from P.S. Eliot and, to a large extent, departures from each other. The bands’ second albums, Cerulean Salt and Surfing Strange respectively, were both released in 2013 to critical acclaim. Both represent to an extent a refinement of sound, with Waxahatchee becoming a full band and Swearin’ becoming more ambitious. The twins also remain involved in the music scene at large: both of them, for example, appear heavily on Radiator Hospital’s Torch Song, released last September, keeping them solidly as essential parts to the best music Pennsylvania has to offer. With Waxahatchee releasing a new album this spring, these creative forces are undoubtedly here to stay and will be a delight to follow over the coming years.

Where to start with these bands? While they all have incredibly solid discographies, here are some top picks (in no particular order):