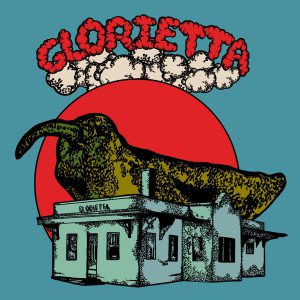 When I heard first about Glorietta, I was very excited. It was to be a new project from the mind of Matthew Logan Vasquez. Vasquez is the former front man of Alt-Rock band Delta Spirit, and a leading practitioner of the modern Americana genre. For a while I heard nothing about this project and almost forgot about it. Then through a random circumstance I remembered Glorietta and saw that they had dropped their album.

The recording process of this album is quite interesting. Vasquez collected many talented musician friends throughout his career touring both with Delta spirit and as a solo artist and decided he wanted to bring them all together. So, he got these friends (Noah Gundersen, Kelsey Wilson (Wild Child), David Ramirez, Adrian Quesada (Brownout, Black Pumas), and Jason Blum) together and recorded this album in nine days in Glorietta, New Mexico. Midway through the recording session Nathaniel Rateliff joined the crew and helped on the album.

The album itself has so many different voices and styles. It is very easy to tell that this was recorded by eight different people. Each artist has at least one song that they sing, and all the songs are really good. The only two I was not crazy about were “Lincoln Creek” and “Someday.” These were slower songs that to me were strong lyrically but did not have much else to them.

The best song on this album has to be “Golden Lonesome,” sung by Vasquez himself. The lyrics are sad, and the song is about being alone with your feeling and being unable to do anything about them. There is strong emotion behind this song. “I Know” seems to be the only song that has Rateliff on vocals and it is another strong performance. It takes his strong soulful voice and gives it a Gorillaz-esque tune that works really well. “Hard Way” is another awesome song that really gives Steve Earl vibes. It is a strong rocker with gritty vocals.

My favorite two songs though are a tie between “Sinking Ship” and “Easy Come Easy Go.” “Sinking Ship” is sung by Kelsey Wilson and is the only song she sings. It has an eerie-sounding soft tune and gives the listener a hopeful yet depressed feeling. The song is produced masterfully, and the chorus is brilliant and will give you chills. “Easy Come Easy Go” is a very mellow tune that has a soft acoustic guitar and drums and gives a very southwest vibe. This is a song you could get lost in very easily.

The album ends on two strong songs; “Mindy” and “Las Estrellas.” “Mindy” is large sounding, protruding and gritty. It almost gives me a Blue Oyster Cult “Godzilla” Vibe. The last song on the album is “Las Estrellas” which translates to “The Stars.” It is a soft love song but also finishes that southwest feel that Glorietta was going for.

Overall, I am very happy with the album and I hope that these artists continue to collaborate.