“Gravity and Time” by The Black Black – Review 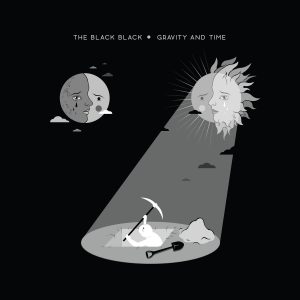 The Brooklyn industrial-tinged rock band The Black Black has existed with various lineups since 2012, but they have a tightness you would expect from a group that had maintained a consistent line-up for quite a few years. They released their new concept album, Gravity and Time, on September 30th, which follows a man who has just awoken for the first time in the present day and must deal with the world.

It isn’t overwhelmingly sad, nor overbearing, nor does it choke you with an oppressive darkness; yet Gravity and Time has a distinctive grim confidence appropriate of a band named The Black Black. This is in large part due to the fuzzy bass juxtaposed with the sharp upper melodies on guitar and keys. It is driving and energetic, showing real passion and proficiency from the five-piece outfit. Jonathan Daily plays to his strengths, as the vocals fit the style of music exceptionally, and the instrumentation to sound better than it otherwise might in a different genre. Chris Schnaars and Hiro Williams both complement the lead melodies with their smart synth and guitar playing, respectively. The greatest strength of the band, however, can be found in the driving rhythm section with incredible bass work from Dima Drjuchin and strong drumming that keeps the songs on track from Stephen Reader.

There are times that The Black Black fall flat on their album. Sometimes the songs can seem to get lost in themselves and drag on for too long with not enough substance, the biggest offender being “We Can Ride.” However, even at its worst, Gravity and Time never falls below mediocre and at its best, is incredible. “Ego Inflater” is a powerful rocker that utilizes high speeds and a call-response chorus to be one of the more memorable tracks on the album and a definite high point. On “I Wanna Love You” and “Kingdom for the Passerby,” The Black Black show that they are also able to craft intelligent songs below a breakneck speed. They don’t feel out of place at all, instead serving as pillars that the rest of the album is able to use both to build in the other songs and provide a stability that prevents it from failing due to sameness. The best part of “I Wanna Love You” is when the song breaks into an almost conversational tone and provides some of the best lyrics we hear, including the title itself, “I never quite got the gravity of the fact that gravity and time are the only ones you ever loved.”

Final Thoughts: Despite some weak points, the best parts of Gravity and Time make it a worthwhile listen.