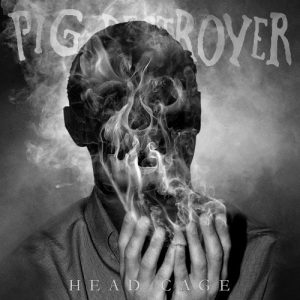 Since 1997, Alexandria, Virginia based grindcore outfit Pig Destroyer has consistently put out some of the most noteworthy and violent music the metal genre has to offer. After 2012’s ferocious Book Burner, Pig Destroyer have undergone some changes. Most notably, Agoraphobic Nosebleed bassist John Jarvis, cousin of drummer Adam Jarvis, has taken over bass duties for the band. Head Cage is significant in that it is the first Pig Destroyer LP in 6 releases to feature recorded bass.

As Pig Destroyer have done historically, they open the album with the sample-heavy “Tunnel Under the Tracks.” The opener lists a warning about how Pig Destroyer are not responsible for any hearing impairments on the album followed by an emergency siren. It makes the listener uncomfortable. It’s truly upsetting, and that’s exactly what the band is going for. What immediately follows is the first real track on the album, the visceral “Dark Train.” Clocking in at only a minute and twelve seconds, this song follows the conventional grind formula that Pig Destroyer have employed for over 20 years.

The third song and lead single, “Army of Cops,” is where Head Cage takes a turn and deviates away from the old school Pig Destroyer sound. Here, more focused and elongated song structure begins to appear. This track sees an ample 3:18 run time, which isn’t within itself relatively new to Pig Destroyer, but does begin a shift in the speed and style on the album. Instead of beating the listener with a violent wall of noise, Pig Destroyer employ groove and take things a little slower. The bass rounds out a fully realized rhythm section for the very first time on a Pig Destroyer record. The groove employed by the bass and guitarist Scott Hull become a pervasive theme all throughout Head Cage.

The album truly hits its stride when it reaches the fourth track “Circle River.” Once again, the groove and slower approach is front and center. What’s really admirable about Head Cage as a whole is that even though the bass is a rather new addition to the band, Pig Destroyer don’t shy away from completely utilizing it in their sound. Songs like “Circle River,” “The Torture Fields,” “Concrete Beast,” and “The Last Song” completely employ groove and feature comprehensive bass and guitar work. Head Cage is different than past albums, this is not 22 tracks of songs ranging from 30 seconds to 1:30. This LP sees songs reach and consistently stay over the 2 minute mark.

While there are new conventions deliberately placed all over Head Cage, this is not Pig Destroyer leaving their grind roots in the slightest. Bruisers such as “Terminal Itch,” “Mt. Skull,” and “Trap Door Man” all employ the recognizable tropes featured all throughout Pig Destroyer’s grind-filled discography. They are short, visceral, and crushing. Featuring tremolo picked riffs and palm muted breakdowns, they all continue the foundations the band have set forth throughout their career.

After listening to the final track, “House of Snakes,” the album as a whole can finally be digested. No, this certainly is not the same Pig Destroyer who recorded Phantom Limb and Prowler in the Yard. This is a band who, while not abandoning their roots, are evolving their sound. In many cases, Head Cage begins to truly feel like a hardcore record. This is not bonafide grind to its core. Head Cage is incorporating a plethora of new ideas and elements into the Pig Destroyer sound. Groove, bass, and a new emphasis on producing longer, more layered and varied songs comes into play. While this is not by any means the first time Pig Destroyer has flirted with longer and slower paced songs, this is the first time for them to appear consistently all throughout an album.

Head Cage, as a collective work, does have some downsides that can’t be ignored. Notably, the final track, “House of Snakes,” clocks in at a hefty 7:08. In all honesty, it really doesn’t need the length. The intro feels like it was taken directly from Metallica’s Blackened and the whole first half of the track lurches but doesn’t seem to go anywhere. It is important to note that the final 4 minutes of “House of Snakes” features some of the band’s best performances on the entire album and is able to salvage the piece as a whole. Some of the fat on it could have been trimmed as it doesn’t feel like a cohesive song.

Another difficulty comes in the form of the vocals. Vocalist and lyricist JR Hayes doesn’t provide much in the department of range and employs what can best resemble a hardcore shout all throughout the album. It can get a little tiring when there isn’t much happening on the mic besides a non-varied shout. While there is a little bit of relief when Agoraphobic Nosebleed’s Kat Katz helps take over on mic duties on songs like “Terminal Itch” and “Concrete Beast,” the vocals still aren’t anything to truly write home about. While nothing is truly bad on Head Cage, there are moments that are altogether forgettable and unremarkable. In the end, for a 31 minute record, it can feel rather long, and that’s a tough pill to swallow.

When Head Cage hits its stride, it is an absolute behemoth of a record. It’s sludgy and buries the listener underneath a layer of dirt. With all things considered, Pig Destroyer is evolving and developing within their own sound. Within its own merit, Head Cage is simply too similar to be considered a departure, but at the same time, different enough to stand out in their discography. While Head Cage is certainly not Pig Destroyer’s magnum opus, but it is more than worthy of having its place in the band’s legacy and continues to cement the bands status as one of the biggest gems in metal’s underground.