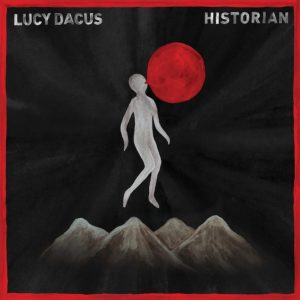 The first time I heard Lucy Dacus’ new album Historian, it was the Friday before spring break while I was on the bus heading back to my hometown that I am not from, basically just a place where my parents live. A huge windstorm was hitting the east coast and I was worried I was going to have to sleep in Grand Central Station, because the bus wouldn’t make it there on time for me to take a train. This is the perfect album if you’re looking for something to distract you. Historian is and is enjoyable throughout.

“Night Shift,” the album’s opener, is a six minute song and one of the few at that length that I’ve had the attention span to listen to on repeat. It’s a story that  begins with the poignant line “The first time I tasted somebody else’s spit, I had a coughing fit,” and really sets the mood for the album. It starts as almost a love song and becomes a new beginning for Lucy’s new relationships, you see this shift with the line “In five years I hope the songs feel like covers, Dedicated to new lovers.” “Addictions” is a song that is close and nearby, like we are in the room observiving as she sings to herself. It’s a beautiful melody, and is catchy too. “The Shell” is a much poppier song than most of the album, it’s a synth driven song, and is about getting out of your comfort zone. “Nonbeliever” is a rock melody about friendship and reaching out. It’s a nice song that feels warm and builds nicely. “Yours and Mine” is probably the catchiest song on the album, but is still quite sad. It’s about getting about getting over something and being sure to take care of yourself. “Body to Flame” is a beautiful song, it has this melody that flows in and out; it also has lyrics about the death of a loved one. “Timefighter” is a more bluesy rock song where Dacus questions her own morals in the chorus “I’m just as good as anybody.” It’s around six minute long so the melody changes throughout the song from soft to heavier. “Next of Kin” is a catchy song thinking about what to do with someone’s belongings and over thinking. In the chorus “I am at peace with my death I can go back to bed,” she has accepted the death of someone. “Pillar of Truth” is another song that is perhaps longer than I am used to; it’s a seven minute long song, questioning what she is and what she’ll become. She’s thinking about how her own death will affect her descendents. The song reflects her sad and angry perspective. “Historians,” the final track on the album, is a slow track where Dacus is trying to get her thoughts together and close the album.

Overall Historian covers some serious themes of death and relationships and weaves them together. It’s a big change for Lucy Dacus’ second album and I really like the direction she’s going as an artist and musician.

You can come cry with Elyssa from 2 to 4 PM as she hosts Anxiety Hours on WPTS radio and follow her on Twitter @elyssapollio . This review was edited by John Wright of the WPTS Editorial Board.