How Special Was Pitt’s Upset Over UCF? 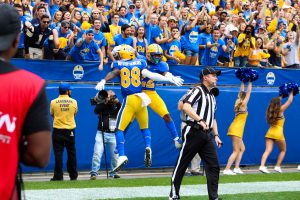 The heartbreaking loss to Penn State was never going to be an easy pill to swallow for Pitt, but they had to swallow that pill fast since the very next week they had to play another top 15 opponent in UCF. The story of the week was that the Knights wanted come in and validate that they could compete with the Power 5 teams. They had already defeated Stanford earlier in the year, and a win over the defending Coastal champions would do nothing but strengthen their case for being snubbed from the College Football Playoff for the last few years.

The Panthers, on the other hand, really needed this win. If they could pull it off and upset UCF, Pitt would be in a prime position to not only gain national recognition, but also could be looking at a legitimate 9-3 season should it pull off the victory.

There were some who thought Pitt could do it, but most had to see it to believe it. Pitt came through with a 35-34 victory in what was a roller coaster of a game. Pitt was up 21-0 at one point, dominating in every facet of the game. That was until UCF scored 31 unanswered points to go up by double digits. However, the Panthers clawed their way back into the game and won off of the Philly Special, popularized by the Eagles in Super Bowl 52.

The Panthers, like last week, still have a lot to learn even after playing a really good game and pulling off the upset of the week. The injuries, on top of it all, are something to monitor, but from this upset, here are my five takeaways.

Dane Jackson Is A Walking Blanket

Coming in as one of the captains of the defense in his final season at Pitt, Dane Jackson has been nothing short of fantastic this year. He had some fluky penalties against Virginia that could have gone either way, but outside of that, Jackson has continuously locked down some of the best receivers in the nation.

Penn State’s K.J. Hamler and UCF’s Gabriel Davis both did not record a reception while being covered by Jackson. Jackson’s side of the field is seemingly always locked down, no questions asked. And when it is thrown his way, Jackson has a heck of a knack for breaking up passes. Last year he had 14 pass breakups, this year he has six already.

He might be the most unsung hero on this defense, but Jackson has been nothing short of lockdown thus far on the season. 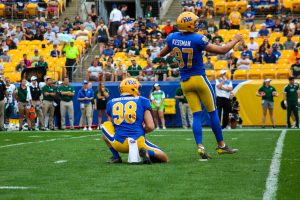 There is no beating around the bush, that is a huge issue. Narduzzi is going to allow Kessman to work through his struggles, and with a kicker who has that strong of a leg, I don’t have a problem with that.

However, not having a kicker to rely on in close games is going to be an issue moving forward no matter how you slice it. Especially if Pitt gets into their fair share of close games where they will need a reliable kicker. Kessman has to figure things out moving forward.

Okay, okay, that might seem to be hyperbole at this moment, but Taysir Mack and Maurice Ffrench already have 27 receptions and 31 receptions, respectively. For what it’s worth, both of those marks are top 10 in the nation, with Ffrench being fourth across college football.

As time has gone on, Mack has proven to be more and more reliable. He made circus catches against Penn State, but he had two other solid outings as well, particularly against Ohio. He is already on pace to shatter all of his career highs, and the progression he has taken in his game leaves no shock to the fact that he has worked on his craft and taken strides.

Ffrench’s success should be of little to no shock. He has been the backbone of this receiving corps for the past two years now, and if Pickett had not missed some opportunities against Virginia, Ffrench could be among the top of the nation’s receivers in receiving yards and more. He has been great, as per usual.

Pitt has a dynamic duo that most teams truly do not have. The loss of Tre Tipton won’t be an easy pill to swallow, but Kenny Pickett has two great receivers to throw the football to for the remainder of the season. 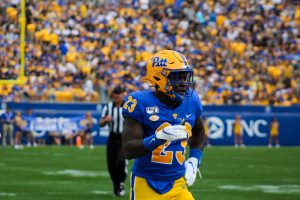 Vincent Davis & A.J. Davis Are The Top Two Backs On This Team

The running back situation has been uncharacteristically muddy for Pitt this season. There have been a myriad of guys vying for the opportunity to win snaps in the backfield with Vincent Davis, A.J. Davis, V’Lique Carter, and Todd Sibley all trying to get their fair share of carries.

Four weeks into the season, that picture is not that clear, but it is becoming much clearer. I will be a supporter for Sibley to get more snaps, but the top two running backs based off of the snaps they have gotten so far are easily A.J. Davis (4.4 YPC) and Vincent Davis (4.2 YPC).

Vincent Davis has shown a knack to be dynamic. He is a smaller back at only 5’8”, but he has been an absolute force at making guys miss thus far. Pro Football Focus actually has Davis in the top ten of their elusiveness rating. And when you watch him, you can see that. He is quick, shifty, and downright fast. He has been dynamic thus far.

A.J. Davis has improved his vision each week and offers the best receiving back out of the backfield. If there is one guy to trust at being the all-around back right now, Davis would seem to be that guy far and ahead. His tough-nosed style of running will only earn him more snaps.

Those two playing the way they have, plus the struggles of V’Lique Carter, seems to only lend itself to the fact that they will likely take the majority of the snaps in the upcoming weeks.

This Team Is Only Improving

Pitt took some serious strides this week after that crushing loss last week. The offensive line meshes better each week and looks better each week. Kenny Pickett is standing pretty back there for a good portion of the game.

The defense is only getting better, and perhaps the biggest improvement on the entire field has been Kenny Pickett. He has been nothing short of great these past two weeks as Pitt has given Penn State and UCF troubles all game.

However, the biggest improvement this week was on the coaching staff. Okay, they still need to work on their second-half adjustments, but Narduzzi and Whipple have been learning from their mistakes. Narduzzi was far more aggressive against UCF and it won them the game. Whipple called a better game flow and worked to the strengths of what was working. That’s growth.

Up next is Delaware as Pitt plays at home against an FCS team. Delaware has not been a slouch of an FCS team recently as they have sent guys like Nasir Adderley to the NFL. They were 8-3 just last season, so the Panthers cannot just think they can skate by here.

Pitt is 28-point favorites as at the moment, but with struggles in the past against FCS teams, I expect Pitt to come out and put this game away rather quickly, as they should.

This team should win this week and get healthy for Duke the week after. As long as they play clean, disciplined football, the Panthers will be 3-2 as they head into their second ACC game on the year.