“How to Resolve Our Human Problems” by Belle and Sebastian – Review 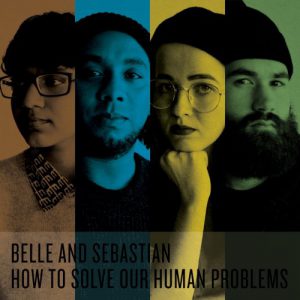 The comparison between the release of “How To Solve Our Human Problems” and Belle & Sebastian’s famous 1997 three-EP cycle, consisting of “Dog on Wheels,” “Lazy Line Painter Jane,” and “3.. 6.. 9 Seconds of Light,” is an easy one to make. It becomes apparent, however, that the differences between them reveal more than their similarities. Belle & Sebastian’s music has evolved to face the uncertainty and anxiety of life in the zeitgeist. At the same time, their answer to the question of what it means to be an indie band, while always unique, has adapted to the new realities of music consumption. Their wry subversion of the trappings of fame—promotion, touring, the “album”—takes on a new meaning in a world where only the more hardcore fans buy physical records on release day.

Musically, the EPs continue the band’s stylistic exploration of modern electronic production elements that came into full bloom with 2015’s “Girls in Peacetime Want to Dance.” They incorporate synthesizers into the unique, delicate instrumentation that has come to define the Belle and Sebastian sound. EP2’s main single, “I’ll Be Your Pilot,” features a solo oboe line alongside the intricate background harmony and lead singer Stuart Murdoch’s light vocals. Those vocals, however, are another important modality of sound evolution; you would be hard-pressed to find more than a single song on previous records that featured the solo vocals of Sarah Martin, but her increased presence on these EPs have elevated her to a lead vocalist in her own right.

As with their 1997 EP cycle, each of these EPs is built around a single, a tentpole selected from their impressive archive, which allows each of them to be viewed independently.

EP1’s “We Were Beautiful” lays out Murdoch’s anxiety of living modernly through the metaphor (or perhaps simply misdirection) of a post-apocalyptic future. Lamenting that “we were beautiful before the years came/and turned it upside down,” the song sets up the primary conflict of the album as a whole: the various anxieties of aging, raising children, and simply living in today’s world.

EP2’s flagship “I’ll Be Your Pilot” is a far more personal, much less “Belle and Sebastian”-esque track from Murdoch to his young son. Again utilizing the lens of potential dual-interpretation, this song, which alludes to the classic existential French children’s book The Little Prince, about a crashed pilot who encounters a small child who was prince of his own asteroid before landing in a desert, works also as a monologue about the anxieties of raising a child.

Murdoch begins by acknowledging that, although he has dreams and aspirations for his son, he doesn’t own or control him. He implores his son that “it’s tough to become a grown-up, put it off while you can,” and remarks that he’ll guide his son through the turbulence of growing up: “I will keep you safe, I’ll be your pilot.”

EP3 serves mostly to conclude the trio, with its main single, “Poor Boy”, taking the classic story of lovesick boy romanticizing a relationship that could never work. It’s a brilliantly written and beautifully produced song, perhaps the best representation of just how good the blending of electronic elements and classic indie-rock guitar and vocals can be with this band at the helm.

Each EP is, fundamentally, a smattering of the many avenues that Belle and Sebastian has pursued throughout their musical lifetime: plenty of comfort-food, sepia-toned stories of literary schoolboys hopelessly in love that formed the heart of classic albums like 1997’s “If You’re Feeling Sinister” as well as new-wave neo-disco tracks that the band started experimenting with in 2013’s “The Third Eye Centre” and previously-mentioned “Girls in Peacetime.”

However, it’s essential also to analyze the releases as one coherent album; the two-part suite “Everything is Now”, which began meanderingly on EP1 to much criticism and concluded brilliantly on EP3, are prime indicators of why some critiques of the “fluff” on the EPs were unfounded. The releases work as discrete EPs, but also very much as one coherent album.

The release strategy of three EPs in quick succession serves also to elucidate some of those anxieties: in a recent interview [https://www.stereogum.com/1966312/qa-stuart-murdoch-on-belle-and-sebastians-new-ep-series-and-the-state-they-are-in-after-20-years/franchises/interview/], Murdoch expressed disappointment with the standard album promotional cycle. Belle & Sebastian has always been a band that rebels a little bit against the trappings of what it means to be a modern indie band: constant touring, standard album promotion cycle, openness to fans. This release, certainly intended to seize the media cycle each time a new single (four of them for this release) or EP drops, represents both a giving-in to the new reality of the attention-span of modern music fans.

This three-EP cycle is both a rejection of the formal trapping of an album release but also a firm statement of recognizance that B&S aren’t the mysterious Glaswegian outsider anymore, but a firmly established pillar of indie pop history. They can do middle-age their own way.

You can tune in from 8 to 10 PM on Fridays to hear Sean host “The Swing’s the Thing” on WPTS Radio and follow them on Twitter @theonesean. This review was edited by John Wright of the WPTS Editorial Board.