“I’ll Be Your Girl” by the Decemberists – Review 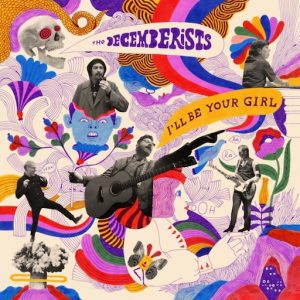 “I’ll Be Your Girl” opens in classic Decemberists fashion: strummed guitars and lead singer Colin Meloy’s distinct, plaintive voice. But the opening track, “Once In My Life”, quickly gives way to pounding drums and powerful synths. However, this evolution of the band’s sound masks a lyrical regression. The kind of ornate literary storytelling that fans of the Decemberists have come to expect simply isn’t present on this album. My favorite songs of theirs—Down By The Water, Calamity Song, Make You Better—they all tell the kinds of layered stories that feel almost like they should be art films or the kinds of short stories at home in the New Yorker. There’s none of that on this album, save for the intricate suite “Rusalka, Rusalka/Wild Rushes,” most of the songs seem like the band carried the idea of an refrain to its most absurd extreme. In short; this album feels phoned in. It’s repetitive and simplistic, replete with the kind of songs your drunk friend would make up to mock, well, bands like the Decemberists.

Here’s the problem, though: despite the cringeworthy lyrics and unsatisfying songwriting, I find myself tapping my feet to some songs on this album. Their experiments sometimes work out; “Once In My Life” is a brilliant, epic piece of music, and the whole album definitely benefits from John Congleton’s masterful production. Though for every encouraging success, there’s an equally discouraging failure: “Cutting Stone” and the title track both feel disjointed at times, when a synthesizer line sticks out a little too much for comfort. At the end of the day, the new sound that the band puts forward on this album just heightens my disappointment, as it shows what kind of album the Decemberists are capable of if they put their minds to it.

I find myself in the awkward position of giving a middling rating to an album that I have been listening to repeatedly. This is the conundrum of style over substance: an album can be fun to listen to and simultaneously leave the thorough listener feeling unsatisfied. It’s certainly a testament to the Decemberists that they can phone in an album and have it turn out as good as this. However, I expected more from an album released in a time when so many musicians have provided listeners with nuanced and brilliant takes on the zeitgeist. You can’t blame the Decemberists for trying something new, but you do have to blame them for just not trying hard enough.

You can catch Sean as the host of The Swing’s the Thing every Friday from 8 PM to 10 PM on WPTS Radio and follow them on Twitter @theonesean, this review was edited by John Wright of the WPTS Editorial Board