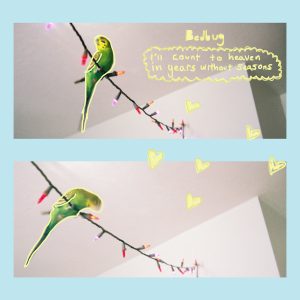 Bedbug’s “i’ll count to heaven in years without seasons” caught my attention for a couple of reasons. First Bedbug (or Dylan, as they call themselves) is my friend’s cousin and I saw them play at another friend’s birthday party last year. The other eye catcher is its label, Joy Void, a Boston based record label that includes Horse Jumper of Love, one of my favorite bands, as well as records by Infinity Crush and American Pleasure Club.  Bedbug is just Dylan, even though i’ll count to heaven in years without seasons has a few other musicians.

The album initially feels very quiet, but at the same time a bit messy, like they just threw sounds together on this record. It sounds a little off kilter, featuring poems as well as music. And while it does feel messy in places, it creates this personal effect as if I’m living a day in their shoes. The lyrics on this album can sound really sad, but at the same time it’s comforting to hear some of these things from someone else’s mouth.  At times, the lyrics really come of sounding more beautiful and warm like on the song “Autumn” where Dylan sings lines like,“ it’s getting late and I’ve got classes early in the morning” which is just instantly relateable.

My favorite track on the album is the closing track, “all the seasons remind me of you” It provides an optimistic closure to the album and is very thoughtful in its lyrics. The music on this album is hard to describe in a lot of ways. While Bedbug could be described as “folk” or “electronic” I could say this album is at times both, or neither. The best way to understand what I’m trying to say about these tracks is to just give the album a listen.

You can follow Elyssa on Twitter @elyssapollio and come cry with her on Anxiety Hours every  Monday from 2 PM to 4 PM. This review was edited by Thomas Troyan of the WPTS Editorial Board.