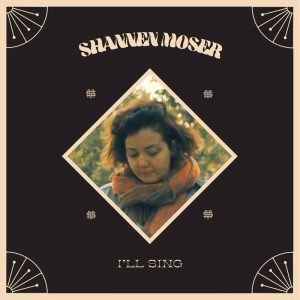 When I first heard Shannen Moser open for Pinegrove nearly two years ago, I fell in love with her folky acoustic music accented with beautiful vocals and a penchant for poetic lyrics. After becoming a pretty big fan of her album Oh, My Heart, I was enthralled at the announcement of her sophomore album. At first listen, however, I was put off by I’ll Sing. The album breaks from Moser’s soft-folk past and delves into genres closer to classic folk, country, and sometimes rock. In a contrast to her previous recordings that feature mostly guitar and sometimes cello harmonies, I’ll Sing utilizes a variety of percussion and orchestral instruments, most prominently a drum kit and keys.

My favorite aspect of the album is that her songs showcase her amazing vocals and skill on the acoustic guitar while still allowing Moser to explore a range of musical expression. After my second and third listens, I can confidently say that I am in love with the album’s experimental sound. The songs on I’ll Sing create a variety of different moods, ranging from painfully nostalgic to downright joyful, and though some of the songs made me birth-control cry even after several listens, I thoroughly enjoyed Moser’s new style.

The opening songs feature much more varied instrumentation and a range of tempos and emotions, while the final eight turn to a steady stream of nostalgic acoustic guitar, vocal harmony, and elegant lyricism. I found myself much more drawn to the varied and somewhat more lively sounds of the beginning tracks; though I would have favored her slower songs in other circumstances, I found myself a little bored by the end of the album. However, through these changes, Moser’s skill at songwriting remains evident through the whole album with her use of melodic instrumentation and vocal harmonies, as well as her quirky and poetic lyrics. One of my favorite musical moments on the album was that of “Haircut Song,” in which Moser’s soft acoustic guitar riff is filled in by lush instrumentation during the first verse which swells and falls with the pace of the song. Moser also uses her lyrics to discuss the range of emotions and experiences of life, which adds another layer of emotional depth to her already emotive music. I had many favorite lyrics, especially verses that called to mind late-summer landscapes and “Arizona in the fall.” The lyrics and musicality that Shannen Moser employs in I’ll Sing creates an experience that is both emotionally cathartic and absolutely beautiful to listen to.