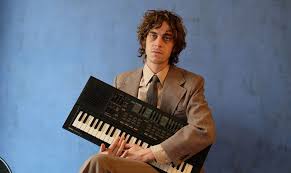 It’s impossible to talk about the new project of Saul Adaczewski, the London-based duo Insecure Men, without talking about its origins in the wake of his dramatic and difficult departure from Fat White Family. Asked to leave the band due to longstanding problems with drugs, Insecure Men is a project that encapsulates both Adaczewski’s intricate, honest songwriting and his rejection of the loud, guitar-driven punk of his songs and playing for Fat White Family.

I had the distinct pleasure of seeing Fat White Family play live in Washington, DC, and suffice it to say I was surprised upon my first listen to “Insecure Men”. The self-titled first release of Adaczewski’s band certainly lives up to his remarks that “what I did in Insecure Men couldn’t really be expressed via Fat White Family.” From the very beginning track, Subaru Nights; which starts with an LCD Soundsystem-esque drumbeat with plenty of vibraphone and cowbell in the mix, the songs on this album defy anyone’s expectations of what this album would be. The songs he delivers are just as wry as his writing for Fat White Family, but they’re utterly devoid of the manic energy that Fat White Family imbue their recordings and shows with. Fat White Family is a band that is, quite literally, built on hard drug usage, mental illness, and a general British strain of nihilism; Insecure Men is Adaczewski’s rehab not just from his own personal heroin habit, but from the noisy and angry despair that comes with it.

The actual evolution that comes from his sobriety, with the help of childhood friend and frontman of alt-rock band Childhood, Ben Romans-Hopcraft, is remarkable in its shift if stumbling, a little, in its execution. Adaczewski, in rejecting the overdriven guitars, pounding drums, and screaming vocals of Fat White Family, delivers just about every possible combination of elements that, well, aren’t that. I really appreciated songs like Mekong Glitter and Cliff Has Left The Building, but I have a soft spot for 80s Britpop and its effects on modern alt-rock. Someone who doesn’t share my affinity for saxophone accents, heavily-reverbed choruses, and atmospheric synth-strings might not appreciate some of the the variety of avenues that Adaczewski explores in this album. He references the rich history of pop music, both musically, with songs like All Women Love Me, a veritable Belle & Sebastian soundalike replete with group-unison-singing, romantic meanderings, and steel guitar, and through his standout storytelling, like with the aforementioned Mekong Glitter, a reference to British glam-rocker Gary Glitter’s ill-fated residence in Southeast Asia, and a duo of songs about the death of Whitney Houston and her daughter.

Ultimately, you could call Insecure Men a scattershot mixture of referential Brit-pop and London-accented lullabies, but I think that the album is more than just the sum of its parts. Adaczewski has created in this album not a thesis, but an antithesis, an embracing of the somewhat grey reality of life after addiction. He doesn’t advance a life philosophy, but I don’t think he needs to. After all, in AA meetings, all the addict in recovery is asked to do is to live their life, “one day at a time.”

You can tune in from 8 to 10 PM on Fridays to hear Sean host “The Swing’s the Thing” on WPTS radio, and follow them on Twitter @theonesean. This review was edited by John Wright of the WPTS Editorial Board