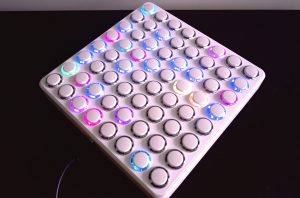 Hyperpop is all about pushing the signature sounds of contemporary pop music to chaotic extremes: whereas typical pop music might flex some booming, chest-vibrating bass drum thumps, hyperpop would turn that bass down even lower and make it even louder; where typical pop music might include a rapper going at top speed, hyperpop would artificially speed up that rapper’s voice till they sound like a chipmunk; catchy keyboard riffs turn to high-speed, high-pitch, jingly countermelodies; common mood changes are replaced by whiplash-inducing switches to double-time or half-time. In embracing the chaotic nature of the genre, artists typically either turn to a dark and heavy sound or a light and fun approach.

The dark and heavy approach to hyperpop makes me, as a listener, feel like a supervillain. SOPHIE, a hyperpop genre pioneer, is known for their signature use of an Elektron Monomachine, which they compared to bubbles popping and metal clanging during their 2014 interview with Billboard. (the effects of the Elektron Monomachine are especially highlighted in SOPHIE’s song “VYZEE”). SOPHIE also produced for Le1f, who made his single “Koi” in a dark hyperpop style to mirror the feeling of sexual dominance in a crowded gay club late at night. The Lil Data remix of “Tongue” by GFOTY starts with drums pulsing so heavily I’d expect them to press me into submission. If I’m staying up late and I’m drained, well past the end of my second-wind, this type of hyperpop jolts me awake like a defibrillator. It all sounds so heavy and so overwhelming, yet it sparks my curiosity at the same time, which keeps me coming back.

Most hyperpop that I’ve discovered lately is on the more lighthearted, playful side of the spectrum. Songs like “Animal Crossing by Cosmicosmo (“Animal Crossing and alcohol are all that I need/if you’re down with that then I’m down to meet cha”), “Paradise Plaza” by Blood Code, and “Home” by OH BOY almost come off as girly with the prevalence of high-pitched voices and—for the more popular ones—cutesy visual accompaniments on YouTube. Yet, the energy of these songs is still immense: I’ve used the perpetual and inexhaustible tempo to propel me through everything from racing games to midterm study sessions. I almost want to compare it to cotton candy, in that when you bite into cotton candy, you hardly feel like there’s any substance there, but the sugar high is twice that of any other candy you could get your hands on. Likewise, don’t underestimate the musical merit of light, fun hyperpop: Shawn Wasabi—who you may have already heard of, thanks to some of his songs going viral on YouTube—famously used 153 distinct samples in his single “Marble Soda,” which stands at a mere 2:52. This is a bit of an extreme case, but just because this side of hyperpop has playful lyrics and lighthearted instrumentals doesn’t mean that it can’t be brilliantly complex.

Although I’ve made hyperpop sound like a world divided between two polar-opposite mentalities, many artists mix and match. “Her” by VALENTINE shares the same bubblegummy spacey chord backdrop as the aforementioned “Paradise Plaza,” but the chorus is so heavy with each quarter note bringing a bass drum that hits harder than Mike Tyson. And of course, this is just one example: musicians and music will never strictly fall into one or two camps. They all blend together, and hyperpop is no exception.

Trying to get a full scope on hyperpop feels like entering a fairy-tale fever dream, like Alice in Wonderland, but fast-forwarded to the point of near incomprehensibility. So far, my best resources for diving into the genre have been a SoundCloud station called HYPERPOP and using the related artists feature on Spotify. Of course, this isn’t a genre that I can consume all at once—it doesn’t take long before sonic-speed songs with heavy percussion wear me out! That said, hyperpop is a super cool sonic space to explore, and I’d encourage anyone to check it out if they’re up for something fast and weird.

You can follow the Facebook page for Sam’s radio show “Square1” here. This edition of “Intro To:” was edited by John Wright of the WPTS Editorial Board.

or click here to open in a new window