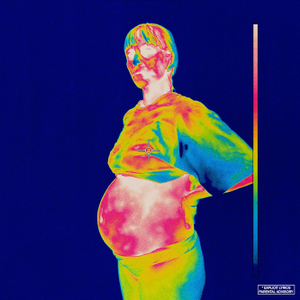 Following their breakout SATURATION trilogy in 2017, America’s new favorite boy band, BROCKHAMPTON, returns with their moodiest and most introspective project to date: iridescence. The band has gone through quite a lot since the release of their last album, SATURATION III; mainly the dropping a staple member of the now 14 person group, Ameer Vahn, due to sexual abuse and domestic violence allegations. This left fans worried about the future of BROCKHAMPTON, leaving them wondering if this reshaping of the lineup would negatively affect the band at all in terms of chemistry or cadence. In many ways, iridescence is a coping mechanism for the group, not just in terms of losing a member and friend, but adjusting to the rapidly gained and new found success accrued from the SATURATION trilogy, which all released within months of each other. Most of the cuts from this record share similar themes of the boys dealing with their mental health, self acceptance, fame, financial success, criticism, and how all of these factors have affected their relationships in life.

As far as criticisms, I only have one, but it turns out to be significant: across the record, particular group members consistently fail to contribute much to the tracks, and even occasionally hold them back. Because of this, many of the songs display a lack of a sense of cohesion between group members. For instance, the very first track, “NEW ORLEANS”, features a bridge from bearface that totally interrupts the energizing, fast, and in-your-face feel of the song. Not to mention, the exact same vocals are just Copy/Pasted on the very next song, which actually utilizes them much better. Perhaps there’s some artistic meaning I’m missing, but it feels awkward and lazy.

The parts of this album that do shine, though, are fantastic. As far as raw talent, most of BROCKHAMPTON is still on their A-game; maturing a bit both sonicly and mentally, even if they’re having some issues making everything fit together. Joba, in particular, did a fantastic job on this project, with his fingerprints on every song – from production to vocals. Speaking of which, the production on the album is probably my favorite aspect. At least some part of every song has been stuck in my head at some point over my listening to the album. The project uses a wide array of unique sounds to get its point across, giving every track its own cadence.

As far as highlights, a few tracks stood out to me in particular. One of these stand outs, “WEIGHT”, opens with a fantastic verse from Kevin Abstract, as he worries for the health of his bandmates, and longs for the simpler days before his success. Behind him plays a beautiful orchestral melody before being interrupted by a passionate drum breakdown, reminiscent of Pretty Sweet by Frank Ocean. The track has a lot to say about the members’ inner struggles with fame and coping with pressure under the “WEIGHT” of said fame. The concluding vocals from Joba encapsulate this as he longs for the ability to deal with stress better, rather than lashing out or self medicating, noted with the lines, “Pressure makes me lash back, wish I could get past that.”

“THUG LIFE” also made a big impression on me. This second song on the album makes a satisfyingly seamless transition from the previous song, as the drum pattern merely continues across both tracks. This time it’s paired with some mouth-wateringly sweet vocals from bearface, which is one of the prettiest melodic moments on the album. Dom McLennon allows himself to get vulnerable on this track as well, discussing his personal struggle with his “shadows inside” as he calls them, and his acceptance of himself. While at first I disliked the vocal manipulations on this verse, I grew to see how integral they are to portraying Dom as small, scared, and lost as he struggles with this part of himself.

“HONEY” is another stand out cut. The song starts off with an industrial hip hop beat and transforms into a pleasingly rich R&B song. Every member of BROCKHAMPTON is on their A-game here. Dom’s inflection and flow mesh perfectly with the beat, and Merlyn’s little, “I coulda been homeless. I thought I moved to orphanage for the summer,” line has been looping in my brain for days. The transition between the two parts of the song is stunningly beautiful and silky smooth. Lots of engaging sounds are featured on the second half, ranging from soulful, belting background vocals and guitars, to police sirens.

Overall, iridescence has a lot going for it, but definitely isn’t the best BROCKHAMPTON is capable of. The production and melodic contributions are fantastic, even if certain members leave a lot to be desired. I overall very much enjoyed the experience of listening to this project, and I’m excited to see what BROCKHAMPTON has in store for the future.