How They Got Here

Prior to the NHL hitting pause on the season, the Stars were third place in the Central Division, behind the St. Louis Blues and Colorado Avalanche.  This placed the Stars fourth overall in the Western Conference.

Upon their arrival to the Edmonton bubble, the team did not look like it had what it takes to push this deep into the playoffs.  The first three games for the Stars, in the round robin, all went as poorly as they could have, as the Stars took two losses, however squeaking out a shootout win against the defending Stanley Cup Champion St. Louis Blues before the start of the Stanley Cup Playoffs.

Arriving in the second round, the Stars were faced with a familiar foe, their divisional rival, the Colorado Avalanche.  Dallas was quick to jump on Nathan MacKinnon and company before the Avs forced a game seven.  Drawing into the lineup was Joel Kiviranta.  Kiviranta became a hero as he tied the game late in regulation, then scoring the series clinching goal, which turned out to be a hat trick for the young Finnish forward.

Never the odds-on favorite, Dallas brought skill and grit to their series against the Vegas Golden Knights.  After splitting the first two games, the Stars quickly took control of the series.  Games three and five both went to overtime; however, each time Vegas never had the answer for Dallas.  Denis Gurianov buried the series clinching goal, a sizzling one-timer that beat Robin Lehner short side.  Another magical Vegas run was cut short by a hard hitting, gritty, veteran team in five games.

As the season was delayed, the Bolts had come off a hot stretch and were cooling down.  The Lightning finished the regular season second place in the Atlantic division, behind the Boston Bruins.

Coming to Toronto, the Lightning seemed to have gathered the team and made changes to their style.  We saw Tampa coast through the round robin, beating the Caps and Bruins, however taking a rough loss to the Flyers.  The Bolts earned the two seed and were headed to the playoffs.

Last year’s playoffs did not go as planned for one of the best teams of all-time, as the Tampa Bay Lightning were swept by the Columbus Blue Jackets.  The mental roadblock presented itself in the first round.  In game one against the Jackets, the Bolts were pushed to five overtimes, making history, as the fourth longest game in NHL history.  Brayden Point scored the OT winner late into the fifth overtime, setting the tone for the series.  Tampa proceeded to win in five games.

Taking on their divisional rival, the Boston Bruins, in the second round, Tampa prepared to face a hungry Bruins team.  The Bolts were quicker, and in a much greater sense, hungrier, than the Bruins.  After losing game one, the Lightning won the next four matches.  The Bruins never stood a chance.

Flying to Edmonton, the Lightning were prepared to stay there for a while.  Tampa set the tone for the series in game one against the New York Islanders, winning convincingly, eight to two.  The Isles showed a bit of resistance in game five, winning in double overtime, pushing the series to six games.  Anthony Cirelli’s series clinching goal put the Bolts in the Stanley Cup Final for the first time since 2015.

For the Dallas Stars, this series will be about containing the Lightning forwards.  The Stars have the perfect extinguisher for the Bolts forwards, as Esa Lindell, John Klingberg, and Miro Heiskanen are all shutdown defenseman.  Even big rig Jamie Oleksiak (6’7”, 250 lbs) has been performing well for the Stars back end.  All forwards for the Stars have embraced a two-way mentality and have forced offenses to readjust.  Blocking shots and laying massive hits have become crucial pieces to the Stars game.

Offseason additions Joe Pavelski and Corey Perry have been vital to the Stars as Pavelski has nine goals while Perry’s pesky factor has been crucial to getting under the skin of the opposition.  Never underestimate a swing of momentum from a thunderous hit or a drop of the mitts.  Pavelski’s presence in the lineup has steadied the depth down the middle for the Stars.

Alexander Radulov has the skills of Pavelski and the plucky mentality of Perry.  Radulov’s stingy abilities has him tied for fifth on the team in scoring.  The Russian forward has come up clutch in these playoffs, as he scored the overtime-winner in game three against Vegas.

As gifted as the Bolts are on the offensive side of the puck, they are equally stacked along the left side of their defense.  Victor Hedman, Mikhail Sergachev, and Ryan McDonagh all carry their respective defense partners.  With the help on the backend, this opens things up for the forwards to roam around and make aggressive plays. 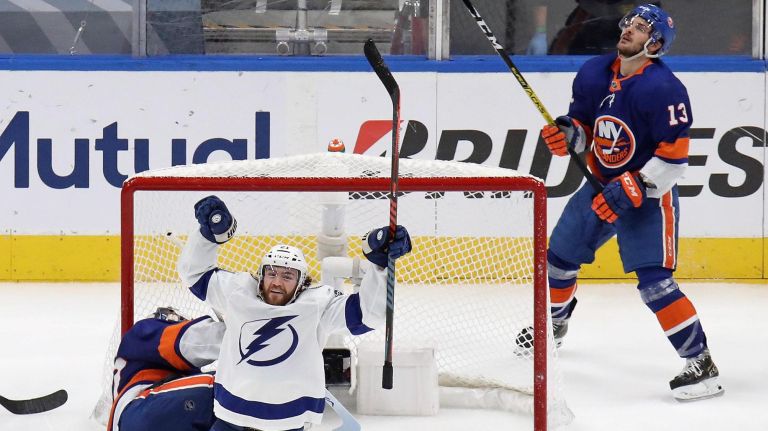 Brayden Point (if healthy) will be a huge difference maker for the Bolts offense.  The quick, crafty, small forward, has skating abilities that allow him to cut quickly and effectively while carrying the puck through the neutral and offensive zones which will greatly contribute to the Bolts quick attack.  2019 Hart Trophy winner Nikita Kucherov leads the team with 26 points in this playoff push as Kuch paves the way for the forwards with Steven Stamkos injured.  Victor Hedman is tied for the team lead in goals with nine as the blue liner is putting up a performance worthy of the Conn Smythe Trophy.

Andrei Vasilevskiy has carried the net for the Bolts as he has played all the minutes for the Lightning this postseason.  His .931 save percentage has paced the playoffs as one of the best among qualified goalies.  A team is only as good as their goalie. 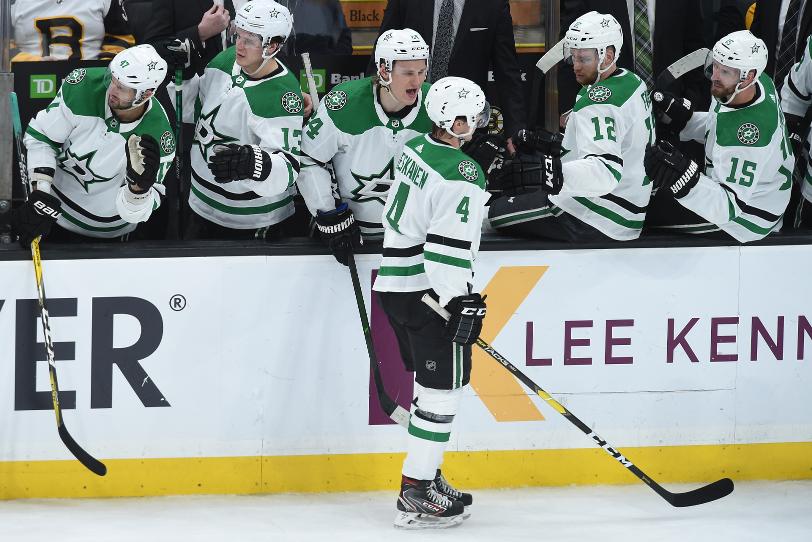 The 21-year-old Finn has proved his worth as an elite left-handed defenseman in only his second year in the NHL.  Miro’s puck moving abilities are next to the likes of young defenseman Cale Makar and Quinn Hughes.  Miro has eased his way into a second pairing role with Jamie Oleksiak this season, letting the young d-man have less responsibility and more openness to his offensive game.  Running the Stars power play, killing penalties, and effectively shutting down middle six forwards has placed Heiskanen amongst the best young defenseman.  Playing in Texas, Miro has not gotten the exposure he has deserved, alas, the hockey world will know his name once the defenseman steps on the ice in the Stanley Cup Finals. 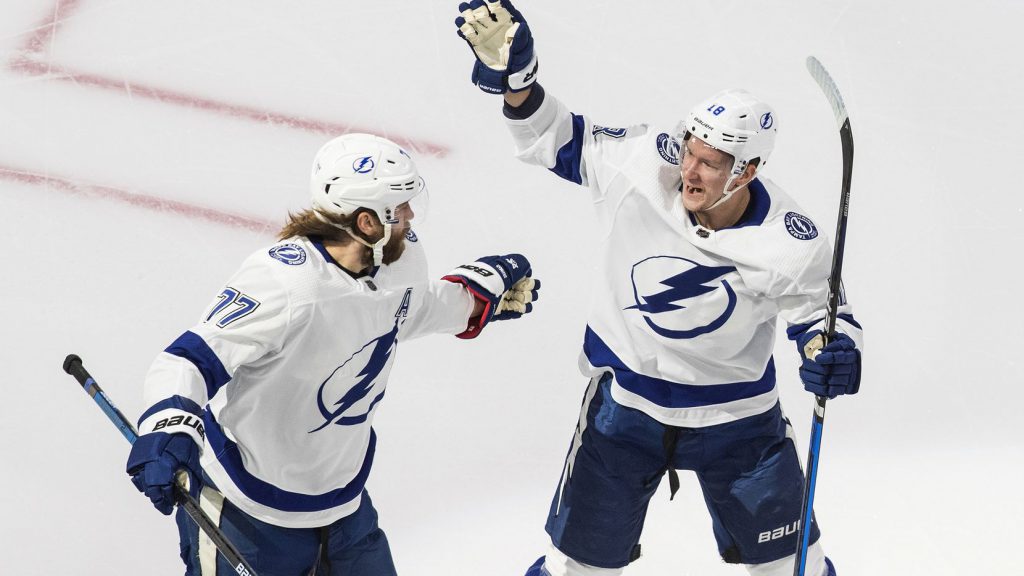 A Norris Trophy nominee, Victor Hedman is one of the most complete two-way defensemen in the league.  In terms of shutting down his opponents, Hedman is the most competent in the league.  Hedman, a defenseman making $7.875 million per year, has been sturdy year in and year out and has always been a factor when he is healthy.  Being 29, Hedman is in the prime of his career and knows how to get around the ice with ease.  Even with health issues as a concern, the Bolts top defenseman never backs down from a challenge.  The 6’6” blue-liner is elite in all terms of the game.  Watch for Hedman to strike multiple times in the Stanley Cup Finals.

The top line of the Tampa Bay Lightning will be matched up with a Scandinavian defense pair for the Dallas Stars.  If the Stars want any chance of winning Lord Stanley’s Cup, Lindell and Klingberg will have to take those forwards out of the series.  The top line of the Bolts has some of the most skilled forwards in the league with Kucherov and Point leading the charge for the Lightning with 26 and 25 points, respectively.  The Dallas defenseman have themselves a handful in the Bolts top line.

Looking at this series from an outside perspective, all things indicate that Dallas is a better version of the New York Islanders.  The Islanders stifled opponents with a strict defense, as do the Dallas Stars.  The Stars will lose their footing in game one, similarly to the Islanders.  However, the forwards are what make the difference for the Stars.  As good as the Isles forwards are, they just don’t match up as deep as the Stars.

Joel Kiviranta has been a breakthrough late in the playoffs while Roope Hintz and Denis Gurianov must dig deep and provide the depth scoring for the Stars.  When the Stars are on, the game will be low scoring, evenly matched affairs.  On the contrary, when the Lightning take games, they will take them with ease.

It would not shock me if Tampa won at all, but I’m going with my gut instinct, the Dallas Stars, in seven games.  Miro Heiskanen wins the Conn Smythe Trophy for playoff MVP.  Alex Radulov will play like a man possessed for the Stars.  Don’t sleep on the depth scoring of the Bolts, like Blake Coleman and Anthony Cirelli.  This will be a fun series to watch.  Stars in seven.