“It’s For You! The Incomplete Hot Snakes” by Hot Snakes – Review 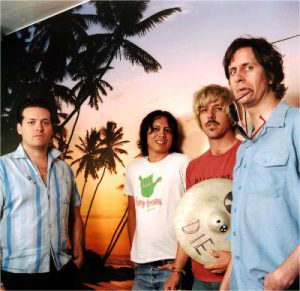 Do you know Hot Snakes? I sure didn’t and I suppose that’s the point. Hot Snakes are a self-described “post-hardcore supergroup” with band members previously playing in Rocket from the Crypt, Drive Like Jehu, and OFF!. They now united under a shared musical banner of punk-rock revivalism, hardcore speed and abrasiveness that can only be identified as that unique, treasured brand of California punk weirdness. Hot Snakes released a trio of critically acclaimed records in the early 2000s, samples of which have been assembled into this compilation and released on Sub Pop Records. This release came in anticipation of both a wider reissue of their earlier work (also on Sub Pop) and the release of new music from the Snakes in the form of Jericho Sirens, a new album out March 2018.

Those seeking a more cohesive artistic statement would be better served seeking out the Snakes’ previous 3 records, whether it be 2000’s “Automatic Midnight,” 2002’s “Suicide Invoice,” or 2004’s “Audit in Progress.” But for a those seeking an introduction to one of the early 2000s most overlooked acts, the 10 tracks contained on their release “It’s For You,”-which runs the gamut from blistering two-minute hardcore assaults to early 2000s “alternative” faire-are more than sufficient. In any case, the Hot Snakes have made an encouraging first impression in advance of their first album in 12 years.

You can follow John on Twitter @Wright_JohnP and tune in on Fridays from Noon to 2 PM to hear John host the Post Punk Roc Bloc on WPTS Radio. This review was edited by Dustin Butoryak of the WPTS Editorial Board.