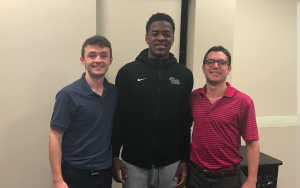 When the 2019 ACC All-Freshman team was revealed this past March, there was one name that stood apart from the rest.  Xavier Johnson was the only player not from Duke or North Carolina to receive the honor, following an outstanding freshman campaign as Pitt’s starting point guard.  Johnson finished his first year with 512 total points, a Pitt freshman record, while also dishing out 149 assists, the third-most in a single season in Panther history.  This week, he sat down with our very own Jason Earle and Sebastian Curtin to discuss what led him to the University of Pittsburgh and how he plans to guide the team to continued improvement next year.