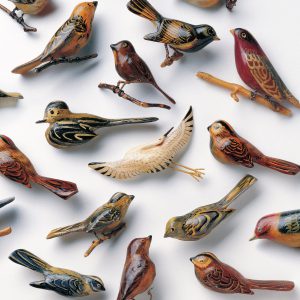 I was recently told that there was no place for happy music anymore. In a world full of injustice and pain, what could there possibly be to celebrate? On his fourth studio album, Omaiyori, Kaoru Ishibashi (Kishi Bashi) sings about one of the darkest parts of American history, the internment of Japanese-Americans during World War II. The album serves as a precursor to a cautionary documentary that sees similarities in the treatment of immigrants both then and in today’s world. This topic is approached not with anger, but with hope. The album’s title comes from the Japanese word that means thinking, about others promotes compassion; this idea of empathy is palpable throughout the album.

At its core, Omaiyori acts as a window into the lives of those who were forced out of their homes and moved into the American internment camps. A common theme is found in a love plagued by separation. This is shown through the album’s painful, soaring centerpiece, “Angeline,” on which the narrator sings “The foreman, he had to come to find / Prison folk to work the mine / The judge was there to give me time / Away from my Angeline.” Despite being torn from his love and forced to work in the harsh mines of Tennessee for a seven year sentence, the memory of her gives him the strength to stay alive. Without knowing the lyrics, this song is an immensely beautiful and catchy love song. The breezy instrumentation and lilting vocals allow for the song to be thoroughly enjoyed with just a casual understanding. On a deeper listening, the magic of Ishibashi’s songwriting is on full display as the bleak story gives way to an unwavering sense of hope.

This optimism in the face of despair is the defining characteristic of Omaiyori, from the harsh criticism of former president FDR on “F Delano” to the lullaby from a mother to her children on “Theme From Jerome.” These lyrical themes are given room to thrive thanks to impressive musicianship and instrumentation supporting the songs. The immaculate acoustic soundscape is equal parts deep as the ocean below and open as the sky above, and Ishibashi takes the listener on a journey across this lovely sea over the course of the album.