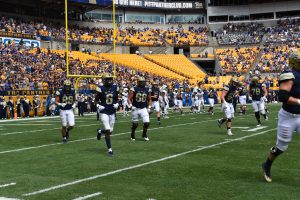 Much to the glee of 45,000 raging UCF fans, this rising college football powerhouse showed once more on Saturday evening why they should be every bit involved in the College Football Playoff discussion along with the Alabamas and Georgias of the world. Pitt? Well, not so much.

In a 45-14 routing of the Panthers, Pittsburgh was decimated by an offense led by Heisman hopeful McKenzie Milton who accounted for 6 touchdowns with 328 passing yards and zero interceptions. Furthering the Floridian offense, UCF receiver Adrian Killins gobbled up three receptions for 140 yards and a touchdown, while tailback Greg McCrae scampered for 64 yards on 10 carries.

Had you simply scanned the box score for this contest, you may have simply shrugged your shoulders in acknowledgment of the elite UCF offense Pitt faced. The unbeaten Knights have yet to win a game by less than 20 points, and their two 50-burgers against UCONN and FAU are indicative of the team’s offensive prowess by which seven different Knights have crossed the end zone this season. Alas, had you watched the match in its entirety, that shrug surely would have evolved into a scowl.

Pittsburgh committed 11 fouls for 125 yards throughout the game, with two of the penalties erasing turnovers they were able to create in the form of interceptions. Sadly, these heavily penalized games are becoming the norm for the Panthers. Most notably, if not for a Quintin Wirginis roughing the passer penalty, Damar Hamlin’s interception would have set the squad in excellent field position. Last year, Pitt ranked 23rd for fewest penalty yards (averaging 41.6 yards/game). This year, Pitt is ranked 96th with 66.3 penalty yards per game.

Under center, Kenny Pickett totaled 163 passing yards with one touchdown and one interception, and a dismal negative 6 yards rushing. Starting tailback Qadree Ollison was only able to muster 49 yards on the ground, and Maurice Ffrench caught the lone Pittsburgh touchdown on the day. Certainly, the one bright spot for the Panthers was a Rafael Araujo-Lopes 86 yard kickoff return for a touchdown (cementing the notion that this year’s special teams squad is a superior bunch to the 2017 grouping).

The Panthers now fall to 2-3, victims of their inability to put the ball in the end zone in the second half. Now 0-2 on the road following a devastating blow to a lowly UNC team, Pitt must solve its second half boggles if they wish to even smell a bowl. Pitt returns home next week to take on a rising Syracuse squad who nearly upset national contender Clemson on Saturday.