Ladyfest Pittsburgh is an annual three-day music festival in Pittsburgh, Pennsylvania featuring lady-fronted and lady-dominant acts. The movement that began in Olympia, Washington, and has since branched out to cities all over the world, came to Pittsburgh in 2014. Three of the organizers for this years Ladyfest Pittsburgh, Steph Flati, Jenn Janon, and Jen Sabol, were kind enough to meet with me and talk about this amazing event that’s proceeds raise money for the Women’s Center and Shelter of Greater Pittsburgh ands Girls Rock Pittsburgh!

How long has Ladyfest been around?
Steph– We always go back and forth about this, but I think Ladyfest has been going for about 5 years now.

Jenn– When it started it was just a small, one day show. Just a couple of bands. And then the year after that it was two years, and so on.

What do you hope that Ladyfest Pittsburgh does for the community?
Steph– I mean, I hope and I’ve already have seen in the past years that it bring the women in the community closer together. I like to see people meeting for the first time and say “oh I love your set!” and then I see a poster later on with those two acts playing together. And it’s great because if they hadn’t met through this maybe they would never know caught each other at a show.

Jen– Yeah and also bring awareness to the women in music in this town.

Do you think there’s a lack of women in the music scene here?
Steph– I think it’s getting better.

Jenn– I think that one of the really cool things about Ladyfest is that it’s a different feeling then at other shows. Women get to talk to each other and connect, and I feel like I make so many new friends that I otherwise probably wouldn’t have made. That’s one of the most important parts for me. It really creates a sense of community for women musicians. And there are a bunch of us, but we’re kind of dispersed.

Jen– And I’ll like see acts or people that just email us asking to play, and I see that they’ve been on all of these tours and have all of these records and I think, ‘Pittsburgh is so small, how have I never heard of them before’. Even within a small town, there are such seperate scenes. Hopefully Ladyfest can bridge some of those gaps.

How has Ladyfest changed?
Steph– Its gotten a lot bigger, which is obvious. But, I always like to say quality over quantity. There’s a lot of festivals that don’t turn anyone away, and not that we want to turn people away, but we try to keep it to one weekend, very specific amount of venues, very specific amount of slots. Anyone that didnt get to play this year should submit again for next year !

Jenn-We’re only a couple volunteers, so we want to make sure the shows are focused and done well.

Jen– I feel like most of the musical acts have been more diverse throughout the years, because I think more people hear about us and submit, and we also search out different acts as well.

Cool! Are the acts mostly Pittsburgh based?
Jen– Mostly, but we do have a lot of touring bands. And a lot of them are bands that we’ve met on tour, and bands that we might know that are on tour so we reach out to them.

How do you see Ladyfest changing in the future?
Jen– This year we opened up to sponsorship which was a big thing. And having more volunteers help organize parts of it.

Jenn– Yeah it was really important this year. We put so much work into putting together this show and we’re actually raising money to pay the local bands this year. Even though we’re raising money for other organizations, we’re also going to be able to pay all of the bands a little bit instead of just the touring bands

Steph– That’s hard because for me I don’t think it needs to be a much bigger thing. It started with local DIY grassroots. That is the definition of Ladyfest, you know? I even felt funny about asking for sponsorships, but so many people came in and said “Absolutely, sure we’ll help!”

Jenn– And what’s really special about the sponsorships is that it is about 80% local small businesses, so it’s part of the local community.

Can you tell me about some of the artists that you’re excited to see?
Steph– I’m really excited for No Men, who are friends of mine, and they’ve played in Pittsburgh a few times.

Jenn– I’m really excited for obviously, Alice Bag. But also, Black Rap Medusa, whose been one of the most exciting acts on the bill. She calls herself an Artivist, she believes in the connection between activism and art. She’s just such an amazing performer and her message is so powerful.

Jen– And also Trash Bag is reuniting for Ladyfest.

Steph– Aloe, Garter Shake, and The Lopez! Haha, those are our bands.

Is there anything you want to see more of from the Pittsburgh music scene?
Jen– I would say more bands that don’t give a fuck, they just get up and don’t care what they look like, and don’t care about what they sound like. I want more irreverent bands.

Jenn– I want to see more mixed bill shows. Kind of like Ladyfest brings together lots of different genres and lots of people that don’t know each other. It’s easier to book shows with your friends, but we need more of different audiences and different scenes coming together.

Any last thoughts?
Jenn– I feel like there’s nothing else like Ladyfest in the city. People should come support because it’s something special and unique that we have here in Pittsburgh

Steph– There are so many festivals in Pittsburgh that anyone can play. This isn’t for everyone. And we’re pro-lady. We can come together and make something happen that’s way cooler.

Jen– And it benefits the Women’s Center and Shelter of Greater Pittsburgh and Girls Rock Pittsburgh! 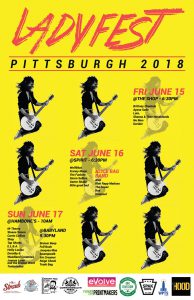