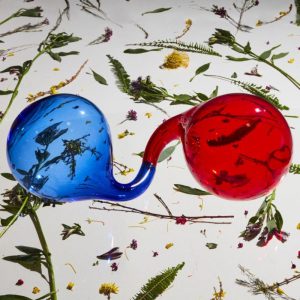 What is the deal with beloved indie bands name dropping the Strokes in 2018? It would make perfect sense if Arctic Monkeys’ Tranquility Base Hotel and Casino or Dirty Projectors’ Lamp Lit Prose were rooted in the Strokes’ highly influential, sleek garage rock, but this isn’t the case at all. Alex Turner’s space-themed lounge music and Dave Longstreth’s R&B-seasoned pop-rock bear no semblance to either of the Strokes’ two albums, so maybe they are just paying belated homage to their elders. Whatever the case may be, Longstreth’s Projectors’ latest effort, Lamp Lit Prose, reintroduces guitars to the avant-R&B of 2017’s self-titled full length, yielding perhaps the poppiest DP release yet.

On Lamp Lit Prose, Longstreth and company recycle the sonic palates from last year’s record and 2009’s Bitte Orca, throw in a healthy amount of horns and a star-studded guest list, and blend until a light indie pop froth begins to form. Songs like “Right Now” and “What Is the Time” follow this recipe to a tee, whereas “Zombie Conquerer” and “You’re the One” seem to leave out the self-titled elements, making for a fairly varied record. Longstreth sings of a new love beginning to bloom on virtually every song here, leaving the Amber Coffman musings of yesteryear in the past. Many of the guests, such as Syd and Empress Of, fill the Amber Coffman-shaped hole by providing soft harmonies to complement Longstreth’s erratic voice.

Lamp Lit Prose will likely be enjoyed by fans of the band, as it is unmistakably Dirty Projectors, but it lacks a certain swagger which many past releases pack. While Arctic Monkeys took a risky step in a new direction on their latest (and it paid off, although some would disagree), the Projectors seem to be making due with what they have: Prose is a fun listen, but it leaves something to be desired, especially when they have used the same materials to build a more interesting record multiple times in the last decade. However, as it is their second release in as many years, it is nice to see consistent output from the band, who will hopefully return to their day job of realizing their full potential in the near future.