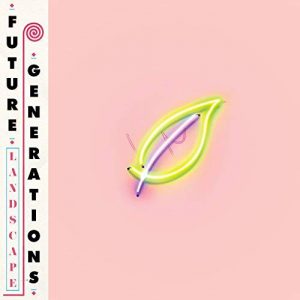 Landscape is the second full length album by Future Generations, a group of five friends from New York who live together, write together, and tour together. They highly value their camaraderie in all they do.

This group of friends has made an exceptionally smooth and surprisingly complex collection of songs. It’s unabashedly playful and holds a driving pace throughout. The entire mix feels like it’s taking place less in reality and more in a day dream. It’s a very upbeat album with a sunny disposition, which is unsurprising given that it is produced by Justin Gerrish (Vampire Weekend, Hamilton Leithauser), but the lyrics touch on darker subjects, such as pre-breakup disillusionment on lead single “All the Same.” Even still, with the extremely catchy melodies in both the verses and choruses, you want to sing along. By prominently featuring all of the instruments, including the bass and percussion, rather than leaning too heavily on just the synthesizers or just the guitar, each song is able to build a more distinct sound. Forty two minutes of pop songs running together would be very difficult to listen to, so the obvious differences between the eleven tracks are very nice.

Out of all the songs on Landscape, “I Never Knew I Was Lonely” has the most unique sound of all. The instrumentation on this track, unlike all of the others on the album, is extremely abrasive. It begins with a metallic screeching before dropping to a understated, dark percussion over which the first verse is sung. When the chorus comes in, the screeching returns with a denser instrumentation. Despite the sharp and rough pieces, the song as a whole feels just as refined as the rest of the album. It is one of the most direct musical statements on Landscape, and instead of wasting it with unnecessarily complicated lyrics, it is accompanied by a universally relatable and unashamedly honest tagline: “I never knew I was lonely until I met you.”

Landscape starts off very strong with the extremely catchy trio of “Stranger,” “Landscape,” and “Suddenly.” It ends just as strong with “I Never Knew I Was Lonely,” “Tear You Down,” and “Incomplete” by mostly forgoing the catchiness, although they still maintain their fair share of hooks, and instead allowing the honest and emotional songwriting to pour out. However, the strength of these songs does have one major drawback. The songs that make up the middle of the album are fairly forgettable, and without a centrepiece, Landscape feels more like an exceptional EP that has been padded out to be a full album. On their own these songs are fine, two of them were even featured as singles, but in comparison to the six mentioned above, they simply can’t hold up.

All in all, Landscape is a very strong sophomore record. Future Generations have shown that they are very good and are on the cusp of being great. They show a lot of promise and their next album will be one to watch for.

Final Verdict: An extraordinarily fun album with many great songs, but just enough near misses to stop it from truly shining.