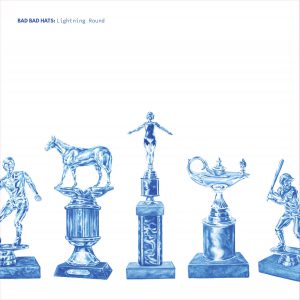 Bad Bad Hats is a three-piece indie rock group from Minneapolis, Minnesota. The band is made up of lead singer Kerry Alexander, guitarist/drummer Chris Hoge, and bassist Connor Davison. They formed in 2012 and shortly after signed to Afternoon Records. Their latest release, Lightning Round, is their second album.

The album starts off strong with “Makes Me Nervous.” I had only been listening for a minute, but I already was liking what I was hearing. Though Alexander’s voice leaves me feeling calm and relaxed, her words provide a very different story. She sings of a love that only hurts, but she cannot seem to let go of it. The feeling of the song is summed up in the second verse as Alexander sings, “I scream at the pool and float like a fool ‘cause I still want to be whatever you need.” Even though her voice stays steady, her words provide all the meaning one needs to feel what she feels.

Alexander’s lyrical honesty shines through in most of their songs, but I believe it does so the best in “Talk With Your Hands.” She gets to the heart of loving someone to the point where you would do anything for them as she sings, “I lost myself a long way back I’d leave it all if you love me back” and “I’ll be what you wanted whatever you want me to be.” I feel and believe what Alexander does as she sings over the simple, effective percussion. She throws her entire being into this love, she will do whatever it takes and all she asks is for love in return.

Throughout the album there are many cases where emphasis on certain words is done in a unique way. It’s typical to emphasize phrases via a shift in vocal tone or volume, but Alexander instead opts to the provide solely instrumental variation. The backing tracks either stop completely and let the vocals to do the work for a short time, or briefly shift upwards in tempo. While this is nice, the fact that Alexander’s voice stays very even throughout the entire album leaves something to be desired. She has a great voice, but using it the same way on every song made them all blend together. However, since her voice stayed relatively the same, I focused more on the instruments than I normally would during the first listen. My favorite song off of the record is “Nothing Gets Me High,” because Alexander’s voice shifts the most throughout the song.

Bad Bad Hats have toured with Third Eye Blind, The Front Bottoms, and Hippo Campus. They are currently on the road with The Beths and Village Bicycle. This summer they will be playing at the final Bled Fest. If you’re looking for a record to keep you calm and ease your worries, Lightning Round will be that record for you. After listening, I was left feeling light and free. If you’re looking for emotional honesty, go no further: Bad Bad Hats delivers feeling and heart in Lightning Round.