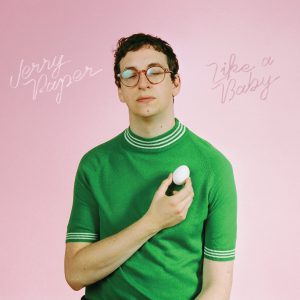 On Like a Baby, Jerry Paper is as goofy and sardonic as ever, yet ever poised and hyper-focused on crafting his brand of mockingly digestible pop. Paper, also known as the being that inherits L.A. native Lucas Nathan’s body when he is grooving, began making music in the mid-2010s with self-deprecating, off-kilter tunes fit completely out of synthetic tones and drum machines for a distinctly retro-futuristic aesthetic. This early sound is encapsulated on video-game-soundtrack-turned-sophomore-LP, Big Pop for Chameleon World, which predates 2016’s lackadaisical, analog Toon Time Raw! (backed by jazz group BadBadNotGood) near perfectly. Paper’s new album feels even further astray from his fabricated roots, with sunshine-y pulses reminiscent of yacht rock, intimate percussion, and acoustic guitar. Matthew Tavares, BBNG keyboardist and an emerging producer in his own right, aids him on this journey toward a more mortal and ambitious trajectory on this release.

While his palette has taken a turn, Nathan’s commentary comparable to his prior work in its tongue-and-cheek but personable qualities. Jerry Paper almost plays the role of the paradoxical, bemused millennial here: overwhelmed with consumerist culture and the pacing demanded of everyday life, but with no choice but to abide by it. His melodramatic croons overlay the slow-paced, bobbing tunes of Like a Baby, filled with unrushed, particular solos that give this recording a palpable wooziness. Paper’s unique crossing of lyrical wit and emphatic production is highlighted especially on the Mild High Club-featuring “Did I Buy It?,” a track musing on being bogged by commercialism, atop dreamy Latin percussion. This newfound organic sound continues, from the frothing kaleidoscopic of “My God” to the echo chamber of groove, “Huge Laughs,” that bounces vulnerability and melodic subtleties within the space of a two-minute song. He even manages to introduce other artists into this world along the way, flawlessly duetting with Weyes Blood on the elevator boogie, “Grey Area,” not an easy feat!

Ultimately, this album is a testament to Lucas Nathan’s evolving and abstract songwriting style, and recorded subtlety without dulling the eccentricity of the artist. All this while offering a bleak undertone I imagine all twenty-somethings can likely relate to— the double-edged sword that is ease of the consumption opposed with a paralyzing sense of existentialism… “I left my phone at home, it feels healthier…”