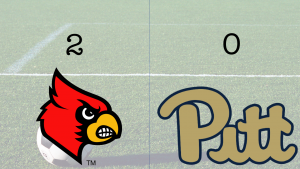 Despite a Panther squad that has already increased their win total from last season, Pitt (4-3-1) lost a hard fought match against Louisville (7-1-0) 2-0 amidst a scenic evening at Ambrose Urbanic Field.

Though Pitt head coach Randy Waldrum admitted the outcome was “not the result we wanted,” the Panthers still recorded statistics and efforts worth roaring about.  Pitt goalkeeper Amaia Pena recorded 8 stops and was an anchor for the defense which shutout Duquesne nine days ago. Attacker Juliana Vazquez just missed a penalty shot that ricocheted off the crossbar, while Clare Beahn, Ari Morgan, and Cheyenne Hudson were all able to muster a shot at a stout Louisville defense.

The good news for Pittsburgh?  The future is bright with two freshman standouts Anna Rico and Madeline Gravante, the only two Panthers who have notched multiple goals this season.  The bad news? The Louisville match was only the beginning of a three-game stretch against opponents who have received votes in national polls. Up next, the Panthers will battle the #6 North Carolina Tar heels in Chapel Hill.