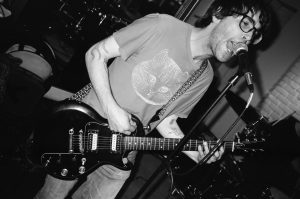 Marriage + Cancer’s self-titled debut draws heavily on influences from the 90’s noise rock scene. The Portland, Oregon band can deliver high energy and controlled chaos in a very exciting way. While very derivative throughout, the album has some high water marks and is a promising debut.

The production on the album calls to mind The Jesus Lizard circa Down, less heavy then Goat or Liar, but still chaotic and dark, just twangier. The way the vocals are mixed distorted and almost buried, plus feels very influenced by 90’s Albini, which is not a bad thing for Noise Rock. The guitar sound is also reminiscent of Drives Like Jehu, featuring strained high chords,  but sometimes even more chaotic, with strange off kilter strumming patterns. The METZ like vocals, part-groaned, part-yelled, can feel very tortured and powerful, but in slower sections, the vocals seem more contained and apathetic. Overall, Marriage + Cancer wears it’s influences on it’s sleeve, but these influences are a roster of some of the strongest bands in 90’s underground rock.

Where Marriage + Cancer shines is in the speed, the noise, and the chaos. On songs like album-opener “Command + Comply,” Marriage + Cancer delivers. Hectic drum fills, brutal rhythm section and pulsating guitar noise lay an excellent backdrop for the tortured screaming that the vocals ramp up to. A lot of the album relies on builds into climactic moments of meltdown. For example, on “God is Tan” the song plods along for the first minute until it builds into a more up-tempo part, and then ends in a total chaotic breakdown at its climax. A similar technique is used on “Headache” and “Flora + Fauna.” These climactic movements are awesome, and sometimes the progression builds tension, but other times the builds feel monotonous and lacking as they force you to wait for the meat, with half delivered vocal parts that feel less apathetic in a punk way and more apathetic in a lazy way. Some of the highlights of the album just dive right into the energy and aggression. On “Honour, on Our Knees,” the driving bassline comes in, sounding mean and brutal, before the drums and guitar come in with a similar ferocity, followed by the vocals. Lyrically, Marriage + Cancer touches the noise rock staple of misanthropy and frustration. My personal favorite song, “Six Feet + a Box,” features lyrics mocking pick up artists.

Marriage + Cancer is a mostly generic noise rock album, but it has its moments, and as a fan of the genre it was an enjoyable listen. It brings the chaos and abrasive attacking moments, but it feels very derivative. I would likely not recommend it to people who are unfamiliar with the genre, but if you’re trying to get into noise rock, just check out some of the Marriage + Cancer’s influences. I think there is a lot of promise here, and I am excited to see how they follow up this debut in future.

You can tune in from 6 to 8 PM on Tuesdays to hear Calder host the Electric Bananarama, WPTS Radio’s premier punk show. This review was edited by Stevie Priller of the WPTS Editorial Board.