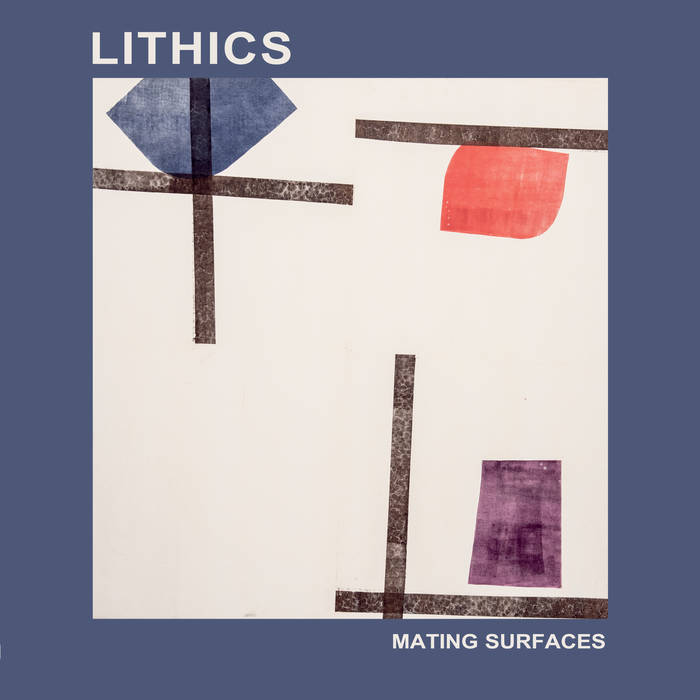 Mating Surfaces is the sophomore LP from Portland Post-Punk project Lithics. Following up their 2016 debut, Lithics delivers an endearing art punk album for the summer, featuring abrasive jangly guitars, danceable rhythms and left field lyrics delivered in an almost sardonic deadpan. Across the 12 songs delivered in less than half an hour, Mating Surfaces provides some original, challenging, and catchy punk jams.

From the moment I stumbled upon the lead single, ‘Excuse Generator,’ this became one of my most anticipated albums of the year. Something about that song, whether it was the hilarious and memorable lyrics, or the strange vocal delivery from which they were delivered, or the peculiar guitar riff that reminded me almost of Television, made it instantly one of the most exciting tracks I had heard all year. As more singles followed my anticipation grew. And as the beginning of ‘Excuse Generator’ kicked off the album I developed a growing suspicion that my anticipation was about to be justified. And it was! Throughout the 12 songs, Lithics delivers on the promise of that lead single, with song after song of unique, strange post-punk.

Mating Surfaces is remarkable in the sense that it sounds almost like it could have been produced in the late 70’s, alongside bands like Delta 5 and Suburban Lawns, but it feels also, almost paradoxically, incredibly urgent and contemporary. While Lithics make angular danceable post-punk that hearkens back to those bands, the music they produce feels like a product of the internet age. Whether it is the jangley guitar tones or the anxiety that undercuts most of the songs, this album captures the essence of that style without feeling retro or stale.

The guitar work on Mating Surfaces is impressive. Songs like ‘Excuse Generator’ and ‘When Will I Die’ deliver unique, exciting guitar performances, playing both pulsing guitar lines and impressive complicated melodies. Throughout the album the two guitars capitalize on each other, never playing simple arrangements that could have been played by one guitarist. At times they clash or compete in a way that works to induce a level of controlled chaos and subdued anxiousness, and at other times they build off each other, making very complex melodies. One particular highlight comes on ‘Boyce,’ where at the end of the song the guitars pulse aggressively, slightly off from each other, building these tensions.

The rhythm section is also a highlight of the record, with danceable drums, and fun basslines. Tittering hi-hats and varied drumming brings a strong grooving feel to the Lithics sound. ‘Be Nice Alone’ features this interesting sporadic drum pattern that’s all over the place in a unique way, setting the perfect backdrop for the metronomic guitar. The bass frequently steals the show, such as on standout tracks ‘Specs’ and ‘Edible Door,’ where the songs seem to build on top of the catchy basslines.

The vocals call to mind the strangeness of Suburban Lawns, but more accessible. The songs are sung with a strange deadpan; they often feel like they are performed with a level of subtle sarcasm. For example, on ‘Excuse Generator’ the line ‘an excuse in your mouth’ is sung with a level of quiet disdain or frustration. The lyrics are often a little difficult to decipher and analyze, but they are strange and intriguing when they come through, such as ‘Glass of water/Spilling over.’

Lithics have delivered an exciting and very enjoyable new album. Fans of classic post-punk bands like Gang of Four and Au Pairs are sure to enjoy this new album, but this album does not fall into the trap of being a stale or retro sounding. Rather Mating Surface is a cool, danceable punk project, with quite a few great songs for your summer playlists.