Mike Krol Plays “Power Chords”, But Is That Enough? – Review 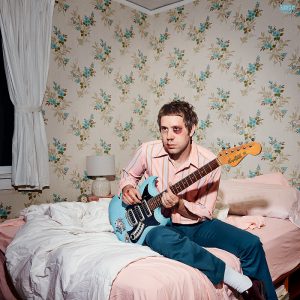 I would like to pose a question: in music, how simple is too simple?

We often praise simplicity in art: a simple story told well is seen as mature, plots with twists piled on top of twists are seen as juvenile. Simple works ought to be bulletproof against accusations of pretentiousness by nature of their simplicity, but there’s a point where simplicity wraps back around and becomes pretentious again. Hang out in any given art gallery for long enough and someone will eventually come by to comment how some piece of modern or conceptual art could have been drawn by their toddler. We like art that’s simple enough to avoid being convoluted or overwrought but not so simple that it feels like the artist is just being lazy.

So, let me pose another question: which of these categories does Mike Krol’s new album Power Chords fall into?

Power Chords takes its title very literally, stripping down to a guitar (or two) and a simplistic drum machine beat for all eleven tracks of its spare 33-minute runtime. Krol is a born punk musician, with a knack for doing more with less. The progressions from “An Ambulance” and “Little Drama” are truly excellent stuff, elegant in their simplicity, earworms in the truest sense. However, what got stuck in my ears is by no means guaranteed to get stuck in yours, and I’m not entirely convinced that I’ll still be so enthralled with Krol’s minimalism after I’ve had this album in my regular rotation for a month or two.

Your mileage with Power Chords (and I suspect the staying power of the album writ large) is likely dependent on what you think of Krol’s lyricism, which is universally concerned with the acidic misanthropy and sullen longing of someone who’s living through the end of a relationship. There’s a note of hopefulness, but, more than anything, you get the sense that Krol believes in fighting the good fight for love and accepting the pain of rejection as a part of life. I suppose this implies he got the bruises and black eye he bears on the cover fighting that good fight.

In any case, so far, I find Power Chords charming. Short and spare enough to digest easily with a sonic rawness that compliments the emotional rawness. If you can find it in your heart to make space in your rotation for another album where a white man with a guitar whines about his love life this quarter, you could do much worse than this.

This album is best enjoyed after waking up and realizing there’s four inches of snow on the ground that weren’t there when you fell asleep.