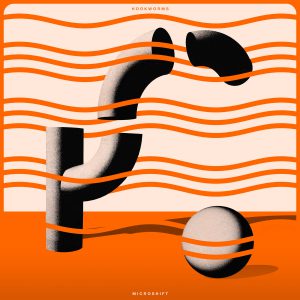 It’s always sort of nice when underappreciated genres make a big return. See; the return of garage rock from the bargain bins of record stores everywhere to dominate the early 2000s indie-rock sound and Britpop finding its roots in the British Invasion bands of the 60s. Hookworms embrace this sentiment by anchoring their new album Microshift with several krautrock epics, similar to King Gizzard and the Lizard Wizard’s 2017 meme/hit “Rattlesnake,” and mixing it with a healthy dose of electronica a la New Order and some good old fashioned indie rock.

The two krautrock songs in question, “Ullswater” and “Opening,” are seven and eight and a half minutes long, respectively, and so they, along with the seven minute synth/noise number “Negative Space” comprise the lion’s share of Microshift’s 46 minute runtime. This may be a problem for some, but each of these compositions is impressive in its own right and does a good job of adding a hook, if you’ll pardon the pun, to the more standard “four minutes or less” rock songs surrounding them.

That’s not to say that these short songs are particularly weak either. One could say that Microshift’s greatest asset is just how listenable it is:, at no point does the record drag or lose my attention, which is doubly impressive considering the length of the compositions at play here. In short,: electronica/krautrock genre fans should most definitely take notice, but those without a background in the genre would be better served examining the roots of both genres (Krafterwerk, New Order, Depeche Mode, Neu!) before jumping into more modern faire like Microshift.

You can tune in to hear John host the Post Punk Roc Bloc every Friday from 12 noon to 2 PM and follow him on Twitter at @Wright_JohnP, This review was edited by Stevie Priller of the WPTS Editorial Board.