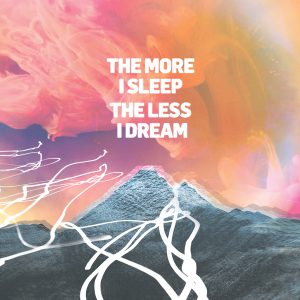 The More I Sleep the Less I Dream is the fourth studio album from Scottish alternative rock band We Were Promised Jetpacks. It comes after a four-year break from touring to work on new music. They released their first three albums in the course of five years and expressed in an interview with Clash Magazine that they had gotten bored with playing the same songs and that concerts had grown routine. With the expiration of their deal with Fat Cat, they decided to take time to work on the next album, including waiting to go to the studio until all of the songs were done.

The more relaxed approach to this album resulted in a very mature and expansive set of songs that fit together well. By working with producer Jonathan Low (The National, The War on Drugs, Kurt Vile), We Were Promised Jetpacks were able to fully realize their vision. The lush soundscape compliments the well-composed, dark lyrics dramatically well. While it does not pioneer despair-ridden lyrics, alternating between primal guitar riffs and understated tracks for reflection, nor high production value, everything is done exceptionally well and woven together extraordinarily. Each piece is a strong example in a well-defined area, but together they build on each strength to form a monolithic example of doing the genre right. The More I Sleep the Less I Dream feels larger than life, a towering figure making its way confidently through the saturated sea of indie rock.

While all ten tracks on The More I Sleep the Less I Dream are fantastic, especially the instrumental track “Improbable” that serves as an intermission between the two halves of the album, there are two that are simply phenomenal. The first of these tracks is “Hanging In,” the final song on the first half of the album and one of the singles that came out prior to release. This song has some of the strongest melodies and most distinct guitar riffs on the album. The verses carry a heavy weight with lines like “No one knows me better than I know myself, but I’m forgetful” accompanied by a simple ascending and descending guitar line that mimics the mental grappling that is present throughout the album. “Hanging In” was a great choice of single to show off the introspective, dark atmosphere that We Were Promised Jetpacks puts on display while still being one of the most effective earworms available. After the first three minutes, the song forgoes the structure it had built and insteads starts with only the rise and fall of the guitar as the vocals chant a new set of lyrics. Before long, the bravado is back to make certain it is ingrained in your mind. In a way, it feels like it is made of two songs put together due to the midway shift, but it is done so flawlessly that it adds to the song dramatically rather than detracting from it. All in all, “Hanging In” is a fantastic introduction to the band as a single and a fantastic turning point as the end of the first side of the album.

The other standout track is the title track which serves as the finale to The More I Sleep the Less I Dream. It is a much slower song than those that comprise most of the album, allowing the closing introspection to be extremely strong. The instrumentation features both lighter playing on the verses and simple, menacing riffs alongside the cries of the chorus. This closer has enough angst to match the entirety of the album, but it never feels unwarranted or obnoxious. There is an order to everything. Much as the title shows that sleeping too much can choke out your dreams, the song shows that playing hard and fast is unsustainable and the track crashes to earth with the sound of a drum as the singing weakens and the many guitars become one slight accompaniment. The More I Sleep the Less I Dream begins with a soft build into the grandeur of “Impossible” and then the fury of “In Light,” so it is only fitting that the finale would show a similar sonic path in reverse. It cements the album’s exceptional sense of unity throughout, which was a big part of what made it such an enjoyable listening experience.

After four years away and many life changes, it is rather remarkable that We Were Promised Jetpacks was able to create such a complete album. With only ten tracks they transport the listener to a different world where outrage and introspection are one and the same. Despite taking a different approach, The More I Sleep the Less I Dream stays true to the heart of the band and is another fantastic step forward.

Final Verdict: Equal parts wild beast and refined philosopher, The More I Sleep the Less I Dream is a high-flying return following We Were Promised Jetpacks’ hiatus.