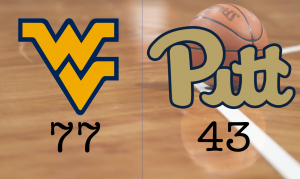 The West Virginia Mountaineers started the game hot with a 14-0 start in the first 4:21 of the game. Pitt fought back to within 10 as they were down 21-11 at the end of the first quarter. Pitt had another scoring drought, this time in the second quarter, that lasted 5:04 before a layup by Cara Judkins made it 26-16. West Virginia extended their lead during the remainder of the second quarter leading 37-23 at the half.