Movie Review | It’s a Beautiful Day in the Neighborhood

The Quick Take:  A Beautiful Day in the Neighborhood is charming, emotional, and worth a watch. Hanks is brilliant in the role of Fred Rogers. 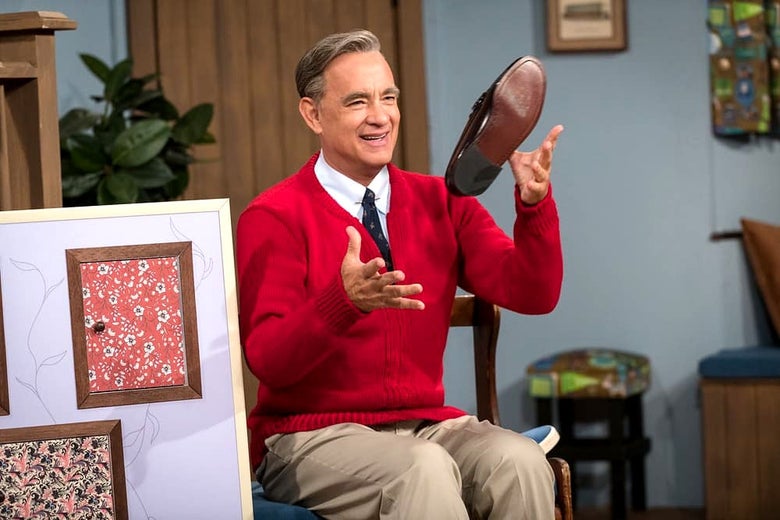 When I walked into the Pittsburgh premiere of It’s a Beautiful Day in the Neighborhood, there was an almost magical aura in the theatre. I was able to arrive fairly early, and as I waited for the movie to start I was awestruck to see people greeting each other in warm embraces and begin to talk about life, the movie, and of course Mister Rogers. These were people who he had known and had an impact on during his life. This continued for some time, and whenever a new face entered the auditorium, the greetings grew more boisterous and the love that these people shared only seemed to grow exponentially. This came to a conclusion when none other than Joanne Rogers entered the room. As she entered, the entire room immediately grew silent, stood with reverence and began applauding for Mrs. Rogers. To see firsthand the neighborly spirit that Fred Rogers has left behind was beautiful.

This neighborly spirit could also be seen as soon as the movie began and Tom Hanks put on the iconic red sweater. The story is framed as an episode of Mister Rogers’ Neighborhood with a picture board, music, and even a special appearance by Mr. McFeely, that eventually creates a heartwarming lesson of forgiveness and growth. Matthew Rhys shines as Lloyd Vogel, the journalist assigned to profile Fred Rogers. Despite the film being described as a movie about Mister Rogers, the story very much focuses on Vogel and many of his familial struggles and letting go of the past. The story eventually leads to Hanks and Rhys meeting, and the chemistry between the two is wonderful to watch. Hanks’ performance is charismatic and he has mastered all of Rogers’ mannerisms. When I was watching Hanks, all I could do was smile.  All of the team seemed to pour their heart and soul into the film. Despite their limited screen time, Susan Watson and Chris Cooper, who play Andrea Vogel and Jerry Vogel, both command the screen and make the story feel more complete. 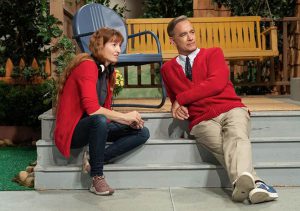 I cannot discuss this movie without giving credit to the technical team and the clear attention to detail that they gave to every little aspect of the film. Scene transitions were done using miniatures in the style of the original opening for Mister Roger’s show. I cannot stop praising the team in charge of the miniature versions of Pittsburgh and New York. These transitions were such a treat. One of the other visually interesting things the production team did occurred when the film was imitating the show. These sections of the film were filmed with a vintage camera quality that helped capture the essence of the original show. Little aspects like these could be found throughout the entire movie. Director Marielle Heller and her team clearly set out with a vision of capturing this neighborhood spirit, and in my opinion, she has achieved her goal of honoring Fred Rogers.

In conclusion,  A Beautiful Day in the Neighborhood is a heartwarming film for this cold winter season. This love letter to the television icon is sure to make even the most stoic movie-goers tear up.