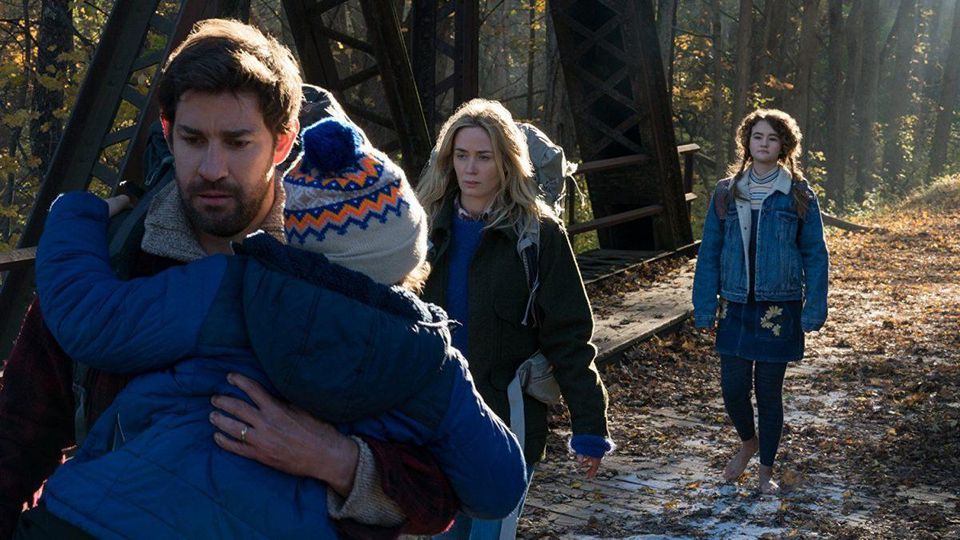 What’s up, movie watchers? Ready to live on the edge of your seat? Become terrified of the slightest noise? Probably stop liking the idea of farm life forever? Well then, you are ready to go and see John Krasinski’s A Quiet Place. Set in the near future, A Quiet Place shows us the lives of a small family in a remote town about a year after an assumed alien invasion. The parents (John Krasinski and Emily Blunt) are doing their best to raise their children in this new world, and the film shows you just how difficult that task will be. There is surprisingly a lot to unpack in this horror movie, so let’s get right into it.

Usually horror movies stories are pretty half baked, with random villains or actions just tossed together to make a somewhat believable tale of terror. A Quiet Place is different. The story of the film is fantastic, and without going into too much detail, very emotional. When I saw this movie was coming out, I was hoping for a good story, and I think we definitely got one. While the film uses many classic horror tropes (jump scares, big monsters, loud noises, lost kids, etc.), there is plenty of originality in the way this story uses those tropes. The lack of dialogue and noise at times in the film leave you terrified of every creak, crack, and stumble that the characters make. It really is the silence of the movie that puts it in another atmosphere, as we see this idea used in a couple other films (like Mike Flanagan’s Hush) the degree to which the lack of sound, and the implications of making sound is used makes the film unbelievably tense.

Again, horror movies usually lack in character depth, but once again, A Quiet Place defies expectations. While there really isn’t enough time to go really in depth about backstory, or really even give the characters names, the development of the kids in particular is great. While both the parents have great characters around them, they tend to be kind of plain and simple. John Krasinski is a very protective father who will do anything for the safety of his family, and Emily Blunt is a quiet, caring mother who will do everything to ensure her children get the chance to grow up in this world. Like I said, very vanilla.

The children, on the other hand, go through character development that really enforces the story of growing and adapting in this new world. Regan Abbott, played by Millicent Simmonds, has to come to terms with a mistake she made in the beginning of the film, and she learns that her family will always love her. Marcus Abbott, played by Noah Jupe, has to learn how to be the man in this world, and how to protect his family. Both actors did an absolutely phenomenal job and really brought out the best in the characters. Also I do need to give a shout out to Millicent Simmonds, who is in fact deaf and killed the role as the deaf daughter. She really took it another level, and she put on some of the best scenes in the film.

The cinematography in this film was very good. It is made up of creative, wide shots that show the depth of the area surrounding the Abbotts. Also the use of red lighting to inflict that extra level of fear was amazing and used so well. The monsters were scary looking, and very creatively designed. While they do look somewhat like the creatures from Stranger Things, they are unique and pretty darn horrifying. I also really enjoyed the nature scenes and shots which were breathtakingly beautiful and provided a strong contrast to the rest of the film as far as lighting and tone. The only complaint I have about the cinematography is that there is a little bit of missing time for some of the characters, and some shots explaining their actions would have been helpful. Overall, nothing too amazing but still very good.

That just about does it for my review of A Quiet Place, though I have a few final notes. First, usually I would discuss the writing to an extent, however there were only around 90 lines of dialogue, so I felt as though it really wasn’t necessary. Second, there are a few errors in the film, how to use a blood pressure cuff, the time it takes to have a baby, and some other things that I do not want to go into detail about. Lastly, I must warn that the ending is open, so don’t come into this expecting a nice ribbon tied in the end. All in all, this was one of the best horror films I have ever seen. It keeps you engaged, uses great techniques to incite fear, and has a great story and characters. I feel like this one could be a classic down the road.

If you liked this, check out our movie review for It