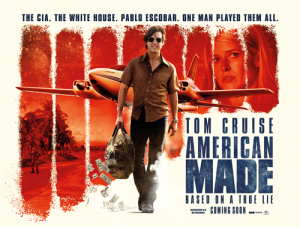 American Made is the new Doug Liman film starring Tom Cruise, chronicling the drug smuggling career of Barry Seal. Based on a true story, the film boasts an action packed life, as Barry flies to Central America to gain intel for the CIA, culminating in various illicit activities such as cocaine smuggling, arms dealing, and transporting the Contras from Nicaragua to America to train them to promote American idealism and crush ideas of Communism in the world.

Tom Cruise stars as pilot Barry Seal, bringing his typical charm to the role. He smiles with glee as he explains via video logs his career, relations with his wife and family, along with his meetings with CIA agent Monty Schaefer (played by Domhnall Gleeson). The scenes between Cruise and Gleeson are energetic, as we see Schaefer manipulate Seal via his love of flying and patriotism. Meanwhile behind the scenes, he uses Barry’s skills and endeavors as a mean to prop himself up in the CIA.

The most entertaining scenes in this movie weren’t the flying scenes, where Seal needs to stay airborne against Central American rebels, or the DEA, but rather seeing his dealings with the various people in his life. The biggest comparison I can make to this is the character of Jordan Belfort in 2013’s The Wolf of Wall Street. But whereas Belfort’s actions are seen as repulsive and manipulative, we are meant to root with Seal, as he cons the CIA out of their guns, selling them to the cartel rather than supplying them to the Contras. This care-free attitude towards his actions make for exciting scenes, but questionable morals. If you relate to Barry, what does it say about you? It almost becomes a commentary on the scandals of today, where through the movie, we are prompted to look back at various events in the Reagan presidency, without dealing with any of the lasting consequences. It prompts us to think, what issues will we be looking back on in the future?

While the movie is certainly well made, Cruise is unable to bring a humanity to his role. As we watch him through the 70s, we see him age, and time pass, but he never manages to grow as a character. He’s just a wide-eyed adrenaline junky looking to have some thrills at the expense of everyone he’s working for. He’s just playing another kind of Tom Cruise character that flashes us a silly smile to let us all know that everything’s okay. So while I did enjoy this movie, it just left me wanting more.