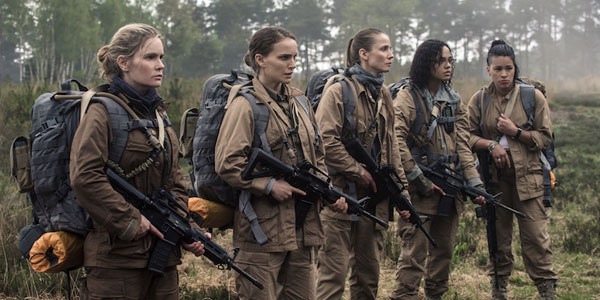 Alex Garland’s latest film is a harrowing, haunting journey into the unknown that leaves the audience itching at every moment for the next reveal. He wowed with Ex Machina, and he returns once more to bring a piece that is simultaneously dream-like and nightmarish.

Based on the first novel in Jeff Vandermeer’s The Southern Reach trilogy, Annihilation begins at the end, showing us the main character, biologist Lena (Natalie Portman) after she has embarked into the vague and foreboding Area X on an expedition. She is quickly established as the sole survivor, and we are thrown into her story.  Her husband, Kane (Oscar Isaac), returns after going missing on a twelve month long secret mission, but he quickly falls into a coma. Lena is transported to The Southern Reach, a facility that studies a barrier called The Shimmer, which has been engulfing swampland since an extraterrestrial entity collided with the lighthouse at the center of Area X.

Lena enters Area X with a team of four other female scientists. The rest of the movie captures their journey through the vibrant landscape. The trees are engulfed in mutating fungi, and alien-like creatures stalk through the marsh. The cinematography is a treat, and each scene is stunningly beautiful. Every scene paints a vivid, engaging portrait of the tainted swampland that is Area X. Each reveal keeps the audience on the edge of its seat and continues to add to the overall mystique of the movie. But Annihilation, for all of its beauty and charm, is also gritty and violent – to those easily grossed out by gore, a word of warning.

The climax of the movie, while surprising and good at tying the plot together, feels a bit rushed, and it is the only reason I felt a need to deduct points from the movie. In the end, however, Annihilation proves to be worth the hype and definitely worth a rewatch. It breaths life into a very overdone genre by adding novel, engrossing plot elements. Audiences leave questioning what exactly it is that makes us human.

But Annihilation is so much more than just a science fiction piece. It’s a science fiction piece about five women – all scientists – who journey into the mystery of Area X after three years of failed expeditions. Where militarized units of men have failed, the fine touch of brilliant women uncovers the secrets behind The Shimmer. It features women of color and at least one gay character, a subtle factor that while not focused on heavily, adds to the overall diversity of the film.

It is easy to take this diversity as a statement, but we shouldn’t. Women make up more than half of the consumers of science fiction literature, and yet they rarely appear as strong, independent leaders. Annihilation passes the Bechdel test with flying colors, but that shouldn’t be unusual for a movie. But it is, unfortunately, because we have established such low standards for science fiction. It is my home that Annihilation ushers in a new era of science fiction films and expectations for Hollywood.