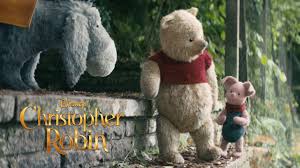 Disney’s Christopher Robin is the latest film in the growing trend of taking classic cartoons from the Walt Disney company and adapting them for a live-action setting. Following films such as their new Cinderella and Beauty & the Beast, the film follows a now adult Christopher Robin (played by Ewan McGregor) as he must balance his intense work life and spending time with his wife and daughter. The classic Winnie the Pooh cast makes an appearance as they come to aid Christopher Robin in his time of need, as he must relearn the magic of having fun.

I haven’t been an avid consumer of Winnie the Pooh related media since I was a child, and even then I wasn’t as obsessed with him as many other children may have been. So walking into this film, I had admittedly, very little expectations. The only actor from the film I really had any familiarity with in the film was Ewan McGregor, and he and the other members did a fine job. Hayley Atwell plays his wife Evelyn, who is faced with distress throughout the film as she is worried about how Christopher’s work life is causing his relationship with her and their daughter to deteriorate. Mark Gatiss plays Giles Winslow, Christopher Robin’s boss who tells him he must work hard in order to gain anything in life, and is your typical “evil businessman” type of character.

Then of course there is the centerpiece of the film, which is the Winnie the Pooh cast. While many of the members are featured at one point or another, the film places a large focus on Pooh bear himself with his relationship to Christopher Robin, and later on adds Tigger, Eeyore, and Piglet as characters who later interact with various characters in the non-Hundred Acre Woods portions of the film. They are comprised of these weird CGI stuffed animals who are given their classic voices that you would expect these characters to have. However, I found that the playful voices given to the characters contrasted heavily with the kind of rugged worn-out look that the studio decided to give them in their scenes.

Overall, the film is a feel-good kind of movie about appreciating fun, and trying not to get bogged down in the business and importance that we assign to full-time jobs. The film brings this point that sometimes in order to achieve some of the best things in life, we must wait in the moment and do nothing. While I don’t think that Christopher Robin is some kind of groundbreaking film, I enjoyed my time with it, and would recommend it if you’re looking for a feel-good adventure with a familiar cast of characters.