The Quick Take: Not bad at all, but not worth seeing unless a child in your life wants to watch it. 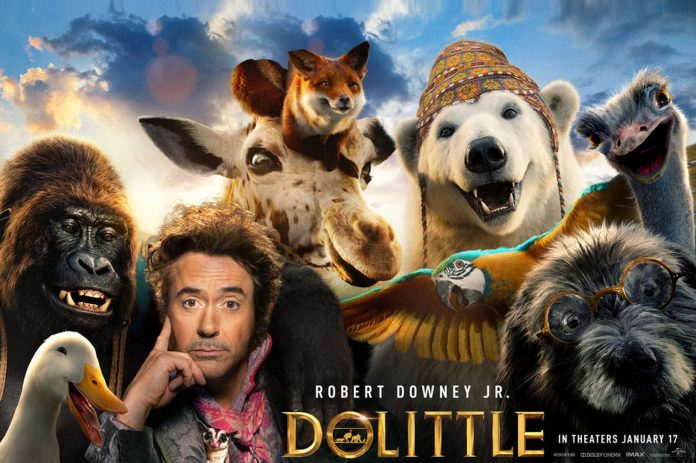 It’s awards season! The film world is all abuzz with excitement, waiting with bated breath to learn who will win Oscars this year. But what does winning an Oscar really mean? Obviously there’s the recognition, the validation, the speech, the little gold gentleman (who’s holding a sword, if you look closely), but what is actually different about you once you have that award?

I ask because a ridiculous amount of Oscar winners and nominees are involved with the production of Dolittle, which opens this Friday, and you wouldn’t be able to tell. It was co-written and directed by Stephen Gaghan, who’s won an Oscar for the latter and been nominated for the former, for his movies about internecine global trade and economics. The cinematographer was honored by the Academy for shooting the hauntingly beautiful Pan’s Labyrinth. The costume designer won for the elevated costume drama A Room With A View, and again for Mad Max: Fury Road, which is not an elevated costume drama. The music was composed by Danny Elfman, who’s been nominated four times – including one year where he was competing against himself- though none of those were for The Nightmare Before Christmas.

As for the cast, forget about it. Dolittle – yes, Dolittle, the one about the guy who talks to animals and goes on adventures – has so many Oscar winners and nominees in its cast that the number went up from 8 to 9 as I was writing this review. Congratulations on being number nine, Antonio Banderas! Like most of the awardees, his part is relatively minor part. The obvious exception is Dr. Dolittle himself, who’s played by Robert Downey Jr. – a three-time nominee (Yes, he’s played other people than Tony Stark). He’s one of only three Oscar recipients to appear in the flesh, and even that’s a bit debatable, since he does the entire performance under an assortment of fake beards and a thick Southern English accent.

Perhaps that’s the difference Academy recognition makes: You get to decide exactly how much work you want to do. Downey’s hair remains uncombed for the entirety of the movie, and most of the other Oscar recipients are just lending their voices to various silly animals: Multiple nominee Ralph Feinnes is a hungry tiger, last year’s winner Rami Malek is a neurotic gorilla, Emma Thompson, who’s won for both acting and writing, is a conscientious parrot who’s the serious member of the group.

None of this is work you need Oscar-level talent or ability to do, and there’s not much that’s added: The performances aren’t bad, but none of them are especially good either, and you could say the same thing about the whole movie. Rumors have circulated around Hollywood of the director being unable to work with CGI and the movie being completely remade halfway through production, and this makes sense based on the number of blind alleys and redundancies in the story: The movie starts with an out-of-place animated sequence telling the story of Dr. Dolittle shutting down his veterinary practice after an adventure gone wrong, and the movie is about how an order to save the Queen of England gives him a second chance to reclaim the life he had. But the movie is also about how that second chance comes when a young boy who loves animals finds the Doctor and convinces him to pass on his skills to the next generation.

Neither of these are bad ideas, and they’re executed competently, but not in any memorable or noteworthy way, in a good or bad direction: All the sterling talent means it’s not even engagingly bad in the way something like Cats is. Instead, the movie is shaped by all the influences you’d expect: The Pirates of the Caribbean series, Harry Potter, Disney’s talking animal cartoons and their live-action remakes, and finally – buried somewhere under the rest – the original kids’ books from a century ago.

It’s easy to see why they would be so far down on the list – having read them, they have exactly as much weird racist stuff as you’d expect any hundred year old British books about exploring the world to have – but to me that just further calls into question the entire idea of the movie’s existence. Why hire all this award-winning talent to adapt something that no one really wants to make, let alone to see? It’s fun for kids when animals talk, but is that concept enough to justify spending on the order of 200 million dollars, and taking up years of everyone’s time, compared to just letting the kids in question watch compilations of Peppa Pig or Paw Patrol on Youtube?