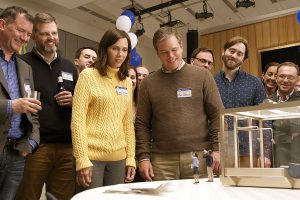 Artistic critiques of American middle-class suburban living and its impact on our current society have fallen in and out of Hollywood’s creative conscience for decades. Films from the 90’s and early 2000’s such as American Beauty, Fight Club, and even The Truman Show relentlessly satirize the lifestyles that many Americans call “normal.” Downsizing wishes to be a part of that now growing list of Middle-Road satire, but with its total lack of devotion to any single moral or even coherent thought, this satire turns into an exercise in empty thinking.

Downsizing, directed by Alexander Payne and starring Matt Damon and Hong Chau, follows a well-meaning middle-class husband Paul (Matt Damon), who wishes to become “small,” an irreversible process in which humans are shrunk down into action figure sized people and then allowed to live in gated communities in the hopes of saving the environment from overpopulation. While films about living in a miniaturized world are nothing new, the examination of how it could benefit society, by reducing waste and consumption, is a fresh idea that easily captures attention and wonderment. Enjoyment of this concept may have occurred if the film didn’t forget that the actors on screen were 5 inches tall about 30 minutes into the film. This forgetfulness on the films part runs itself rampant through a mirage of different moral quandaries. Questions on consumerism, love, immigration, free speech, media coverage, political affiliations, and especially environmentalism are passed through one ear of the characters on the screen, and leave the consciousness of the script only a few scenes later with no real resolution or intelligent thought. It leaves the viewer guessing at what the total meaning of the film is overall, and when the final moral is revealed, you will be more disappointed than satisfied with its decision.

Acting wise, almost all actors on screen give their best, excluding Matt Damon. As the main character, Matt Damon has almost no range of emotions, simply making reactionary statements to everything he sees, never truly smiling or frowning. Christoph Waltz gave his normally great performance, but Hong Chau had her performance stunted by having to adhere to an extremely stereotypical Vietnamese accent ripped straight from Full Metal Jacket. The CGI is strangely terrible, as each small character in normal scenes look as if they have been made from cardboard. Most of the jokes garner a full smile more than actual laughter, and some may find the style of humor a bit dark, which classes too hard with the films wishes of being a light-hearted affair.

Overall, Downsizing comes off more of a wasted potential than a failure to launch. It had too many concepts it wanted to touch upon, but had almost no real meaningful statement or even connections among them. And the film’s final say on its themes and morals came as more of a cop-out than a truly thought out ending. Some audiences may find enjoyment in Downsizing’s playful look at its concept, but others may be chomping at the bit to find any tangible meaning, before giving up in exasperation at its finality.