The Quick Take: Disney hyped a Pixar-level sequel, but the movie they delivered was underwhelmingly Disney.

One of the many breathtaking landscapes in Frozen II.

My favorite part of Frozen II might have been Olaf’s one-snowman-show retelling of Frozen. Olaf’s jokes can be hit or miss, but this sequence was uproariously funny. That said, if my favorite part of a sequel is a recap of the first movie, what does that say about the quality of the sequel?

Historically, Disney has struggled to do what Pixar does best: creating sequels that live up to the original. This movie’s premise does have merit–where did Elsa’s powers come from? Why does she have them? Frozen II dives into Arendelle’s past, revealing family secrets as Anna and Elsa journey to find answers. Was this enough to make a great sequel? Let’s break it down:

The animation: Before the cynical Disney fan in me rears its ugly head, I need to give it up to Disney’s animators–this movie is an absolute spectacle. One thing that Disney rarely fails us on is animation, and boy did Disney dazzle in this film. The characters look fantastic, the settings are gorgeous, and certain sequences are jaw dropping–particularly the “Into the Unknown” sequence, where Elsa’s power flurries across the screen with a life of its own.

A glimpse at Elsa’ song “Into the Unknown”

The tone: Any well-executed Disney animated film finds a balance between lighthearted humor and serious issues the characters face. Frozen II is no exception to this: Olaf operates well as a means to lighten the mood, and even gets a few sentimental moments; Anna and Elsa can kid around one scene and fight the next when their good-intentioned but contradictory views clash. More and more, the humor in Disney movies involves self-awareness and referential humor, but Frozen II references its predecessor constantly. Inherently, a sequel can’t really stand on its own as a fantastic movie–it’s going to draw from the original. Frozen II’s very premise of exploring the past necessitates callbacks to the previous movie. Yet it’s done so much that it’s almost exhausting. Olaf’s recap of Frozen, while entertaining, was completely unnecessary. Half the time, Frozen II is pointing at the juggernaut that created it and shouting, “Wow! Remember how good that was? This is from that!” Amidst these nods, there were occasional jabs at the first movie’s flaws, but even these were a little misplaced.

The characters: As with the first movie, Anna is the strongest character. She has a distinct personality, a clear motivation, and doesn’t contradict her own character arc. The same can’t be said for Elsa. The resolution to the first film was her realization that distancing herself from those she loves is bad. In this movie, she completely reverts to that mindset (possibly because certain plot points demanded she be isolated). This movie’s own “Let It Go” is “Into the Unknown”, but just like “Let It Go”, this song isn’t as triumphant as it sounds. Elsa liberated herself during “Let It Go”, but ignored the consequences isolation brought onto herself and others. Elsa even acknowledges this in Frozen II–she sees herself singing “Let It Go” and cringes. But what is Elsa doing when she cringes? Walking through a frozen structure by herself because she’s afraid anyone else with her will be put in danger. Sound familiar? How can a character be simultaneously self-aware and completely ignorant of her own flaws? A similar effect happens with that gloriously animated beach scene from the trailers–what first appeared to be a powerful scene that celebrates Elsa’s determination now looks like an amalgamation of bad decisions. 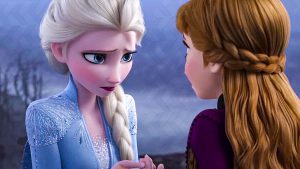 Elsa and Anna grapple with their differences

This movie is at its core an exploration of Anna and Elsa, so Olaf and especially Kristoff don’t get much screen time. It hardly detracts from the story–Kristoff’s goal is to find the right way to propose to Anna, and spends his time on screen doing this as Anna does more important things. Though Kristoff is a great character, I appreciated his side plot not encroaching on the main story. It’s refreshing to finally have a male character on screen whose sole motivation is romance.

The music: The music in this movie is good. Though Kristen Anderson-Lopez and Robert Lopez return to write the music, it’s not as good as Frozen’s–then again I wasn’t really expected it to be. “All Is Found” is a haunting lullaby that weaves through the whole narrative, but the show-stealer isn’t Elsa’s songs–it’s Anna’s. Sung at the character’s ultimate low, “The Next Right Thing” is both heartbreaking and empowering, and Kristen Bell performs with so much emotion that it’s easily the best song on the soundtrack.

Jonathan Groff as Kristoff, deservedly, gets a longer song this time around: “Lost in the Woods”. Sadly, it’s a disappointment, through no fault of Groff’s performance. At best, it’s a parody of sappy love songs. At worst, it’s an odd boyband homage with talking reindeer that makes you think “What the heck am I watching?” The song’s scene is essentially a meme that’s there for laughs instead of plot or character development. Jonathan Groff deserves better.

The ending: From this movie’s finale, it seems clear to me that the writers knew where they wanted this story to end but weren’t sure how to get there. As a result, characters made decisions necessitated by the plot rather than their own stories, causing the music’s integration with the plot and character arcs to suffer. At one point, Olaf jokes around, asking if after all their Frozen II adventures they’ll be put in mortal danger again. The other characters say no, perhaps indicating that this is the last of the Frozen sequels. But if Frozen II makes anywhere near as much money as Frozen, I wouldn’t be surprised if another disappointing Disney sequel is on the horizon.