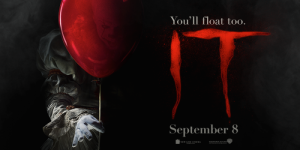 “It” is the new horror movie based on the book of the same name by Stephen King. Taking place in the 1980s, it tells the story of a group of adolescents (name “the Loser Club”) and their friendship as they are haunted by “It.” Part coming-of-age story, part gruesome tale of childhood terror, it is the classic idea of the killer clown. As children start disappearing in the town of Derry, Maine, it’s up to a ragtag group of losers to try and figure out what’s going on – and how to stop it.

The two things everybody has had on their mind with this film are “How are the children?” and “Is the movie scary?” First off, the kids in this movie, I thought, were great. One of the standouts being Finn Wolfhard of “Stranger Things” fame as Richie Tozier, the foul mouthed teen who will try to crack a joke at any moment. My other favorite from this group was Sophia Lillis as Bev, the sole female member of the club who gains the attention of most of its members. Similar to “Stand by Me” the kids felt like… kids. Director Andres Muschietti did an excellent job of melding together this coming of age story with horror for the most part.

Now, for the horror. “It” has been a favorite of many due to having what many consider one of the scariest clowns in the genre. Skarsgård absolutely kills it in this role. Distinct from the earlier portrayal by Tim Curry in the 1990 miniseries, he jumps around with glee, eager to scare all of the kids he wants to encounter. The entire concept of “It” is enough to send chills down the spines of many. A clown who eats children while also being able to shapeshift into their greatest fears? That in itself is almost enough to make many cry. I found that the most frightening scenes weren’t whenever It shapeshifts into various fears, but rather when Skarsgård is able to engage with the children. One of the earliest scenes in the movie, the encounter between the young Georgie and Pennywise the Clown, was very intense, and was enough to send chills down my spine. I feel Skarsgård gets underutilized as a result whenever the film tries to show the fears of the children, then just a quick cut to see It’s clown form. When he’s monologuing to the children, that’s when the movie succeeds.

My biggest issue with “It” is that as a film, it’s at times a bit uneven. Quickly jarring between scenes of adolescent bonding to fears of dealing with a monster doesn’t tend to flow that well. At 135 minutes, the movie begins to drag a bit towards the end. But when the film works, it’s exciting and fun and made me sit on the edge of my seat as I wondered what will happen next. One of the film’s other flaws, due to the nature of the material,  is how things may seem kind of incomplete, as the film only adapts roughly half of King’s original novel. But from what I’ve seen here, I’m excited to see where the next installment of this story might go.