The Quick Take: An enjoyable whodunit (just don’t put it under a microscope). 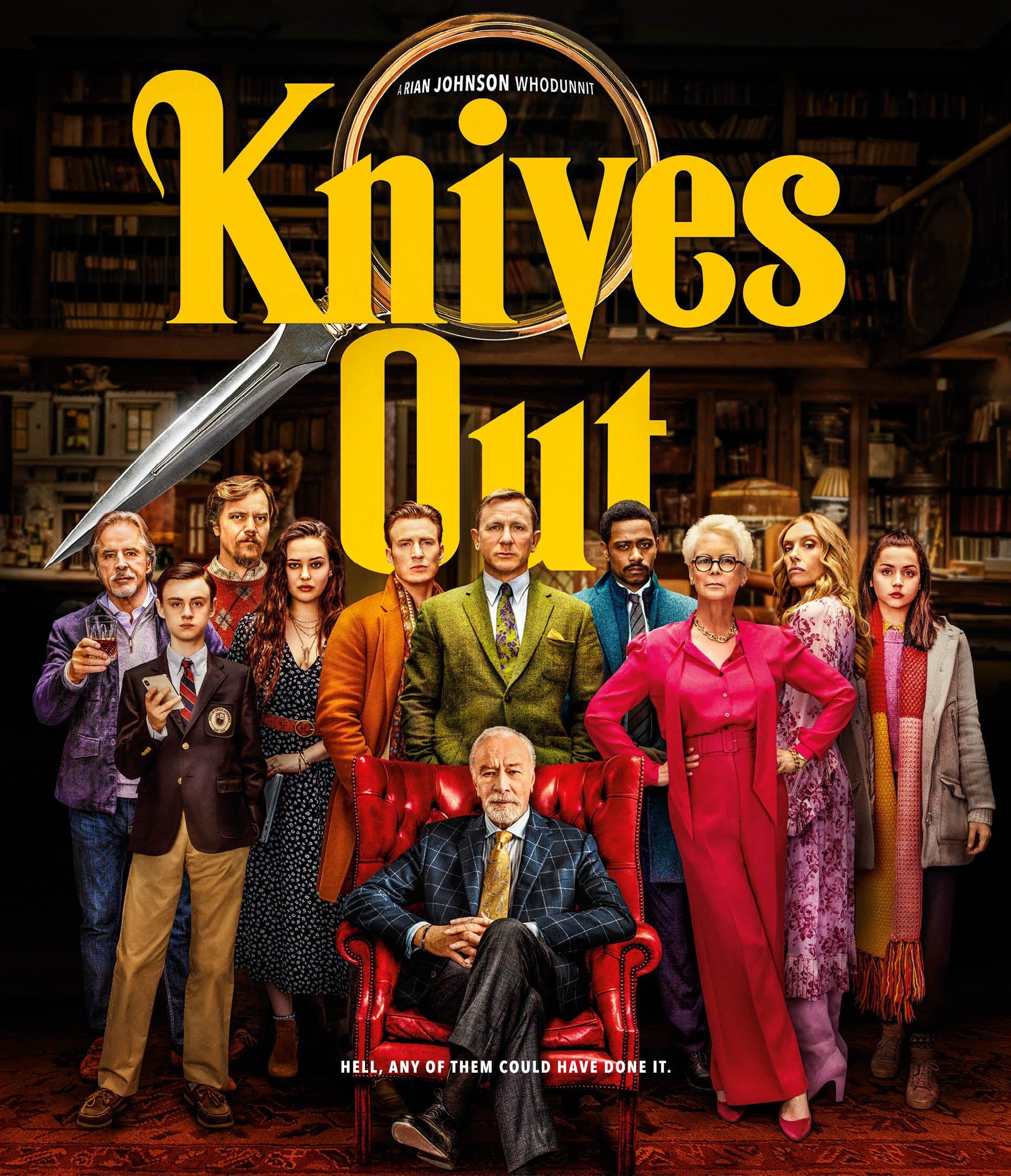 We haven’t seen an original whodunit on the big screen in a long time, and Knives Out pays homage to the classics while not so subtly poking fun at them, with certain degrees of success. It has your basic murder mystery ingredients: a spooky secluded mansion, an inheritance at stake, a party, a slew of uniquely motivated suspects, an aloof private detective—and a murder most foul.

And the entire cast of characters is aware of this. The detectives compare the ludicrously luxurious house to a Clue board, and the man murdered, one Harlan Thrombey (Christopher Plummer), is an esteemed mystery novelist. The P.I. Benoit Blanc is a jabbing nod at Hercules Poirot, only instead of a French accent, Blanc speaks with a  “Kentucky Fried Chicken” southern drawl that I hardly believed was coming out of Daniel Craig’s mouth. James Bond is now a detective who speaks mostly in circles, at one point even calling the murder mystery a donut hole inside another donut hole.

Craig’s oddly enjoyable parody is the first hint that this movie’s gonna turn the classic whodunit on its head. The movie opens with the detectives interviewing suspects, but unlike the classics that don’t unveil the truth behind suspects’ statements straight away, the movie shows the audience what the suspects were really doing as they give false statements. While this adds humor and reveals the family’s dark underbelly, it also robs the audience of attempting to solve certain mysteries on their own. Instead, the movie chooses to put things together for the audience straight away. And then, as if to twist the knife in the wound, the movie tells us 15 minutes in who the murderer is and how they did it.

The majority of the movie focuses on the (surprisingly sympathetic) murderer attempting to cover their tracks. Don’t get me wrong, the game of cat and mouse that Blanc and the murderer play is downright hilarious, but it also takes away the vital tension of a whodunit. Part of the thrill is piecing things together slowly, using small details the movie lays out but designs to be missed. That simply isn’t allowed here because the mystery is already solved. With a VERY big twist at the end, this is exactly what the writers intended–to lull viewers into the sense that we know what’s happening, so we don’t look so hard as we mistakenly believe the biggest mystery of the movie has already been solved for us. While this twist was clever, as a viewer I also felt a little cheated—how can I attempt to solve a mystery if I don’t even realize the mystery exists?

Perhaps I’m just bitter that I couldn’t get to the bottom of things as fast as Blanc. (I can’t tell you how many times I’ve shut a Sherlock Holmes story saying “That’s not fair!” because Sherlock was withholding evidence from the reader.) But one thing I’m irrevocably justified in being bitter about is the general lack of character depth in this movie. Craig as Blanc is a thoroughly enjoyable caricature. Chris Evans, in utter contrast to the saintly role he’s had for the past decade, plays a very convincing jerkwad. Thrombey’s nurse Marta (Ana de Armas) and her personal struggles as the child of an undocumented immigrant are thoroughly fleshed out. The rest of Thrombey’s family, though…each member is their own unique brand of a-hole, but beyond that there isn’t much to them. Their selfish shenanigans are fun to laugh at, but their flaws introduced at the beginning of the movie are really all they have. While Clue didn’t have “deep” characters either, we at least got to see their relationships and secrets unravel as the story unfolded. Depending on your view of the ending, maybe this was purposeful–these people defined purely by their greed and ego must face consequences. But the movie’s hyper focus on the chase throws almost all other characters to the wayside. All those people who are no longer suspects in the audience’s eyes aren’t the focus of the story, and you end up with half a dozen characters that don’t need to be part of the story at all.

On its surface, Knives Out is a great laugh—this movie is good fun and its creators know it. Any good detective knows to look below the surface, but for the sake of this movie, best keep your magnifying glass at home.