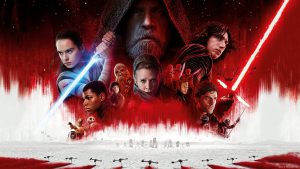 Perhaps one of the most anticipated films of 2017, Star Wars: The Last Jedi is well worth the wait. The newest (and longest yet) installment in the saga picks up where episode seven, The Force Awakens, left off: Rey has just located Luke Skywalker on the planet of Ahch-To, and the fight between The Resistance and The First Order rages on. New characters, such as Rose Tico (played by Kelly Marie Tran), debut; major characters from The Force Awakens return; and even some characters from the original six episodes (that weren’t featured in The Force Awakens) are featured. Completely worthy of its two hour and 32 minute run time, Star Wars: The Last Jedi is easily one of the best movies of 2017.

Fans have spent the time since the last episode theorizing what would happen in this film, but it’s safe to say that no one could have guessed everything unexpected that occurs. As expected, there are many action-packed scenes, with plenty of epic battles and explosions, but for every battle scene there is a multitude of scenes which advance the storyline and aid character development. The plot mostly follows the ongoing battle between The Resistance and The First Order, but the lengthy showtime also allows for some much-hoped-for backstory to be shown. While I’m sure some will be angered about various aspects of the plot, I thoroughly enjoyed the story and can see why some decisions had to be made to create the best experience possible.

The methods of storytelling used in this film are also worthf discussion. One thing I noticed and appreciated upon reflection is how often the filmmakers were able to use visuals to convey plot points, rather than having the characters explicitly state things. The acting, of course, is also incredible; though the majority of the movie is emotionally intense, it is effectively balanced by well-timed comedic relief.

This film does a fabulous job of showing off the advances in technology since the original six episodes. The cinematography is just one of the movie’s impressive qualities: whether showing flyovers of planets, close ups of characters, or even the vast expanse of space, the quality of the image and attention to detail is truly amazing. The integration of CGI and practical effects is also notable, with the adorable porgs and stunning vulptices (the cool crystal foxes seen in the trailer) created through both techniques. The scoring and sound mixing is just as important and impressive as the cinematography.

Star Wars: The Last Jedi is a truly (no pun intended) stellar movie. I only have two complaints. First, there was a romantic plot that felt forced and unnecessary. Second, we will likely have to wait at least two years for the final installment of this trilogy since Episode IX is currently scheduled for a December 2019 release. This December, though, I definitely recommend making a trip to the cinema to see Star Wars: The Last Jedi, as it is one of the best movies of 2017.