The Quick Take: Martin Scorsese returns in glory to his signature crime films with a subversive, masterfully crafted character piece. 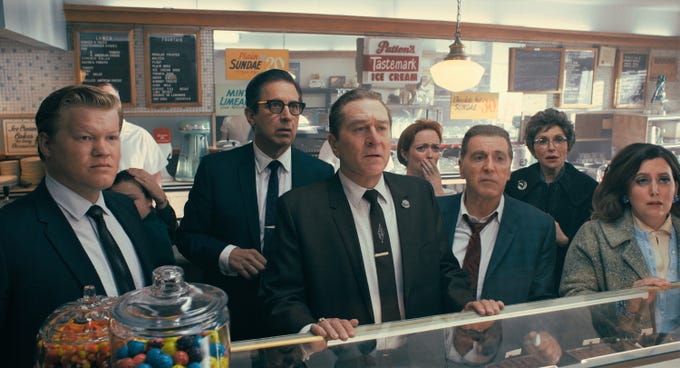 The title card of Martin Scorsese’s latest movie flashes on the screen one word at a time: I Heard You Paint Houses. This is liable to confuse the average viewer, since on the posters, on the tickets, on the headline of this review, the film is called The Irishman. It’s the first indication that Scorsese knows what you’re expecting from a collaboration between him, Robert De Niro, Joe Pesci, and Al Pacino, and that he’s not going to give it to you.

The interplay between the two titles ultimately defines the film and the principal struggle of the title Irishman, real-life mob hitman Frank Sheeran (De Niro). “Painting houses” is killing people–– it refers to the blood that splatters on the walls when Frank carries out a hit (rendered in marvelous, classically Scorsesian violent action), and it begins to interfere with his ability to be a human being. His house-painting mob career clashes with his ability to live a human life, and De Niro and Scorsese leverage the fallout into an expertly-crafted examination of friendship, family, morality, and mortality.

The film is told through a double-nested flashback: in the primary frame story, Frank, wheelchair-bound in the first few years of the twenty-first century, narrates his life to an unseen listener in a retirement home. He flashes back to a road trip with Russell Bufalino (Pesci) and their wives in 1975, and from there to his beginnings in the mob in the mid-1950s. The storylines fold into each other as they meet in time, running directly through to and eventually past the storytelling in the home, culminating in a beautifully meditative final half hour that is entirely De Niro’s; he plays Frank’s solemn reckoning with––somehow––a resigned desperation for absolution.

While De Niro does a fantastic job of heading the film and puts forth the sort of performance that defines legacies in the final act, the supporting cast is what makes The Irishman sing; the friendships, betrayals, and familial connections that resonate through the picture (and they have room; the 209-minute runtime leaves everything its own space to breathe, miraculously––or rather, because of Scorsese and longtime editing collaborator Thelma Schoonmaker’s mastery––without dragging) are able to do so because of, primarily, Pesci’s Bufalino and Pacino’s doomed Jimmy Hoffa. Both are revelatory, Pesci coming out of retirement for another hurrah with his classic collaborators, Pacino somehow working with Scorsese for the first time, imbuing the legendary union president with a pure sense of duty and an unwillingness to back down while also putting on a profanity-laden comedic masterclass.

In truth, The Irishman itself is a comedic masterclass; Pacino is undeniably the highlight, but De Niro and Ray Romano’s Bill Bufalino––defense lawyer extraordinaire––get some great kicks in (literal kicks pose a problem in one of the movie’s few missteps: a truly horrendously, obviously fake beatdown Sheeran puts on a grocer who dared lay hands on his daughter, a bizarre thirty seconds of off-the-mark, clearly 76-year-old performed kicks and mis-synced Foley effects). Stephen Graham, as Italian mobster and Teamsters chapter vice president Anthony Provenzano, AKA “The Little Guy”, puts together the most quotable scene in the film opposite Pacino; rapper Action Bronson makes his film debut in a quick and hilarious cameo late in the proceedings, and a scene regarding a fish in a car is stuffed to the brim with wisecracks. Scorsese uses his own voice for some humor via captions that appear when new characters are introduced, playing their (historical) deaths successfully and simultaneously for laughs and the thematic resonance of inevitable, often violent death–– and making it work, especially in its subversion, when one of Provenzano’s associates’ is captioned “Well liked by all. Died of natural causes, 2001.”

The bit players, like Romano, Graham, Bronson, old reliables Harvey Keitel and Bobby Canavale, and Anna Paquin, stunning in silence as Frank’s estranged daughter Peggy, flit in and out of the story, coloring it in vividly, playing off the deaged-as-if-by-magic leading trio (only De Niro’s effect is ever even remotely shaky) to make Scorsese’s realization of Sheeran’s life come alive in itself. The Irishman fades more than it flashes, and the legends that made it come together create a mural-sized portrait of a life, fading in a steady beauty, fading slowly into the inevitable black with poise and tainted serenity.