The quick take: Your bladder is about to fight its own Hundred Years’ War.

The King (2019) was released on Netflix on November 1st 2019. This English, early 15th century period piece is loosely based on Shakespeare’s “Henriad” as well as historical events. Directed by David Michôd, Timothée Chalamet leads this film by portraying King Henry V; an obvious attempt of breaking Chalamet out of his teen heartthrob mold. He gave a great performance, sort of to my surprise. I mean Timothée in an early 15th century period piece would leave anyone with reservations. He seems to have the face that belongs in contemporary pieces. But to my prevail, he did well with what he was given. Was he a bit wobbly at times? Arguably yes. The script, written by Michôd and featured actor Joel Edgerton, and its volatile nature leaves Chalamet’s character underdeveloped and not fleshed out. That being said, The King will most likely act as a stepping stone in Chalamet’s career, opposed to his breakthrough away from the teen heartthrob archetype.

Objectively, The King was a decent film. It had strong acting, visuals, and plot. However, the whole entire film I was waiting for something to occur and well- I did not get that.  The whole entire film something just seemed off. I didn’t hate my time watching it, but there was some sort of aspect hindering me from expressing genuine like toward the film. After having let the film settle with me, I have come to the conclusion that what hinders me from fully enjoying The King is the length.

The King had a runtime of 2hr 20min and to be blunt: it was way too long. The first time I paused the film, I genuinely gasped when I had over 1.5 hr left. It seemed even longer than what the actual runtime is. If this movie was 20-40 minutes shorter, I genuinely believe the viewing experience would be a better for all parties involved. Going off of that, another aspect that left me feeling unsatisfied with this film was its blandness. Despite the word being colloquial, bland is what The King boils down to. The underwhelming feeling this film brings is further evoked by the fact it is based on Shakespeare. What makes Shakespeare even remotely interesting is the dramatic flair; how everything is exaggerated and overdone and The King failed to do this. Instead we got a brooding Timothee and a film that takes itself too seriously. 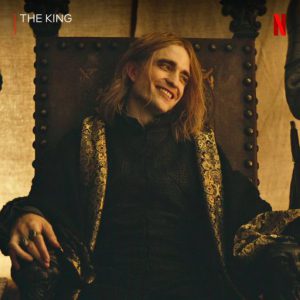 Pattinson as the Dauphin of France

One positive aspect of this film was Robert Pattinson, who gave a Shakespeare-esque performance with his Dauphin of France. His ratty wig and over the top French accent did border on going back to his vampire roots, but were charming and entertaining nonetheless. Only being on screen for 15 minutes, he was able to bring the dramatic flare the rest of the film lacked. 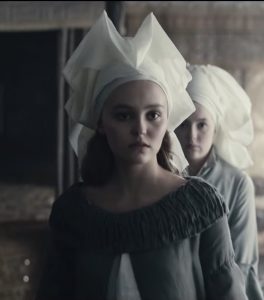 In addition to Pattinson’s performance, Lily- Rose Depp and Joel Edgerton gave lovely performances. Playing Catherine, Henry’s sutor from France, Depp exposed us to the women of this world. Although Depp’s performance was quaint, she was able to make her presence visible. Edgerton shone, being able to break the ice in scenes when tension needed alleviated. He served as the character Falstaff, the only mentor figure Henry had. He was one of the few characters that seemed to have a bit of depth to them. Maybe this is because of Edgerton’s writing of said character?

To comment on the visuals of this film, there were a handful of shots so long that I genuinely could not decipher whether or not the film had become frozen or if it was done on purpose. This brings me back to my central complaint with the film: its entirely too long length. The use of natural light in the film was a bold choice. At some moments it really transported you to the battlefields of gritty 15th century England, but at other times it was entirely too dark to truly know what was occurring on screen.

The incorporation of French was an addition I really took to. It was a nice break from Timothée’s  forced Britsh accent or Robert Pattinson’s odd French one; hearing people speaking authentically was captivating. On the topic of language, there were parts in the script that seemed out of place. Quite a few times the f-word would be slipped in, which had the effect of taking the viewer out of 15th century England. This just contributes to the overarching theme of the film just being off at times. There was a lack of a coherent flow within the film.

The King was a film I do not regret watching, but also left me unsatisfied. With a great cast and high production value, I expected more than what this film gave. Even with the high points of this film, it was a lengthy, clunky film with a dull screenplay. I left the film wondering: who was the targeted audience?