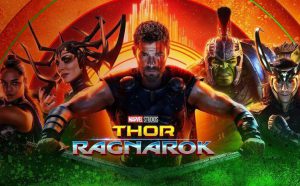 Thor: Ragnarok, the third Thor movie and the 17th installment in the Marvel Cinematic Universe, was released in theaters nationwide on Friday, November 3rd.  The film follows the unlikely alliance of Thor, Hulk, Loki, and a few new faces as they embark on a cosmic adventure to save Asgard from Ragnarok, the Asgardian version of Armageddon.  Their journey is made difficult by the likes of Hela, Surtur, and the Grandmaster of the planet Sacar.  Who will come out on top in this battle of mythical heavyweights?  Below you will find both my spoiler and spoiler-free reviews.

Guardians of the Galaxy 2.5?  Thor: Ragnarok is downright fun.  Like most Marvel movies I have seen, I truly enjoyed this film.  It is bright, colorful, and lighthearted throughout. The casting is spot on, and the vision and expertise of the director is evident throughout.  Still, there were some things I loved and other that simply weren’t great.

Chris Hemsworth was a joy in his best performance as Thor yet.  He was funnier, deeper, and more engaging than ever before.  In past Thor films, they have not taken advantage of Hemsworths comedic ability, and that has been an issue many fans have had with the franchise.  That is not the case hear.  His chemistry with his Tom Hiddleston and Mark Ruffalo.  You could tell that they have worked together for a very long time, and that they truly enjoy each other.

Cate Blanchett was good as Hela, although she was only in the actual film for about 15-20 minutes in total, which takes away from the threat and danger of the character.  It damages the implications.  While she way actually in the film, she played the part well and served as an interesting foil to Hemsworth’s Thor.  Hela was representative of the divide between Thor and Loki, as it is revealed that she is the oldest and third child of Oden.  Thor is all about Asgard and helping people, while Loki is disenfranchised and has a disdain for most others.  Hela is the extreme opposite end of the spectrum for Thor, which demonstrated the redeeming qualities of Loki in the trilogy.

I had two significant issues with film, which are that it is to comedic at times and it is strangely paced throughout.  Thor: Ragnarok was funny, but there were far too many jokes.  Every other line in the movie was a joke or sarcastic remark.  Although it was one of the funniest Marvel movies to date, it seemed at times that they sacrificed actual dialogue for jokes and quips between characters.  I also had an issue with the pacing of the movie.  The first act felt like the fastest act of any film I had ever seen.  It jumped from character to character, scene to scene, and location to location extremely quickly.  This created a significant, abrupt transition to the next act that I found quite noticeable about the film.

Overall, this film was a solid time.  It was funny, colorful, creative, and engaging throughout.  I would characterize it as one of the most fun movies in the MCU, and a fantastic ending to the Thor trilogy.  I recommend any moviegoer, Marvel fan or not, see this film.