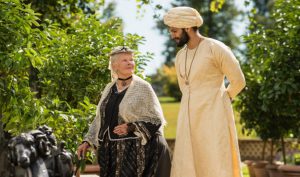 Victoria and Abdul, directed by Academy Award winning director Stephen Frears, is an extremely peculiar movie.  Frears is no stranger to biopic films, and being British born, it should come to no surprise that his most recent film about the royal monarchy should be both accurate to the period and contain strong performances from the respective main cast. The unfortunate aspect of this film is its inability to provide more than that.

The films titular characters are represented by Judi Dench as the now elderly Queen Victoria of the United Kingdom, and Ali Fazal as Abdul Karim, a Muslim-Indian servant to the queen. Judi Dench works well in her type-cast, as a demanding and possibly aloof older woman. Her portrayal as Queen Victoria is what elects the most praise from the film, not as much in her dialog but her actions. Her scarfing of the royal meal in front of other royal members garnered many laughs from the audience. Fazal, who normally works in films outside the United States, also gave a very convincing performance. His constantly optimistic and wondrous outlook towards British culture made for a very interesting dynamic with the Queen. Abdul frequently ignores nuances of British Royal life, which allows him to become very close to the Queen. A very important exchange occurs when he is the only servant to look the Queen in the eyes during a meal, which allows their initial bond to form. Abdul’s lack of understanding also helps to keep the tone light and heartwarming. The movie truly shines when Queen Victoria confides her emotions to Abdul, and they gain a deep understanding of one another.

As for the conflict in the film, much of the royal household dislikes Abdul, due to a mixture of racism and how close he is getting the Queen. To those not familiar with this event, the conflict could seem petty, but it is very accurate to real events. Unfortunately, all conflict in the film is solved in the same manner: with Judi Dench remarking that she is the Queen, and commanding that the conflict end. Strangely enough, the movie seems to hint at a conflict involving how Indians are treated by the British in colonized India, but that fact is treated as a joke multiple times. On the trip to England, a side character who was also chosen as a servant complains about the condition in British-dominated India. Yet, Abdul simply acts as if his fellow servant is complaining too much and remarks on how happy he is to be in England. Later, the Prime Minister of England informs Queen Victoria that there is a famine in India. Queen Victoria simply states that the Prime Minister is too depressing, and she continues with her extravagant meal. An attentive viewer would infer from this exchange that it will become a possibly important plot point later, yet no reference to hardships in India is ever bought back up again. Historians generally agree that their friendship had no impact on the governing of India, but the movie seems to imply this concept through these early discussions, only to discard them later.

The only lasting thought this movie creates is a question: who was this movie made for? For those looking for historical accuracy, the setting and plot is realistic but completely tone deaf. For those looking for a light comedy, there are laughs to be had, but the exposition heavy plot would be lost on those not already familiar with the story. I would only recommend this movie to a die-hard Judi Dench fan, as she really is the only marketable positive to this film. For all others, I would recommend looking elsewhere.