“Mujeres” by Y La Bamba is a Beautiful Journey 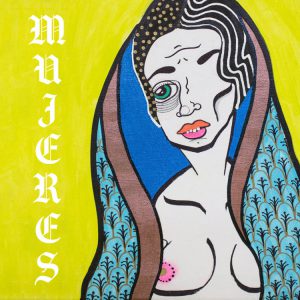 *Mujeres by Y La Bamba is an album in both Spanish and English, but I only know a very limited amount of Spanish from High School. I never look up translations because I think it would be a deceptive representation of my listening experience, and because I expect most readers and listeners to not look up the translations either. If I describe the lyrics, I’m only referring to the lyrics that I understood.

Mujeres by Y La Bamba feels like one of those enchanting singer-songwriter albums that is just too much to fully wrap your head around. Y La Bamba opens with a track titled “My Death,” and continues with otherworldly and thought-provoking monologues throughout the album. Yet Y La Bamba is quick to differentiate itself from the myriad monotonous melancholy singer-songwriter acts. “Conocidos” starts with a guitar timbre that reminded me of Palm, and follows up with intriguing tempo kicks and time changes, all before introducing distant screaming. “Boca Llena” and “Mujeres” are other notable high energy songs on the album, the former featuring a catchy chorus and a hypnotic bassline, the latter featuring booming tribal drums and urgent lyrical delivery. Even on top of the upset and troubling introduction and the intermittent upbeat tracks, Y La Bamba continues to diversify the sound of Mujeres by adding tracks with beautiful, consolidating guitar, as in “Una Letra,” or warm, comforting ambience, as in “Lightning Storms.” Seriously, “Una Letra” puts me on the verge of tears.

I initially felt lukewarm towards this album, because on first impression, this collection of songs—whose influences seemingly span myriad genres—just felt too sporadic. However, as I continued listening to Mujeres, I felt the connections between songs form. This album follows lead vocalist and songwriter Luz Elena Mendoza’s emotional chronologically, which is fittingly nonlinear, since emotions don’t work linearly. From what I can gather in “Una Letra,” Mendoza, has to admit a significant failure, but then she picks herself back up in “Santa Sal,” before the upbeat “Bruja de Brujas,” just as an example. This ebb and flow began to feel natural over several listens, and it makes the 47-minute runtime of this album feel more like 30 minutes (in a good way).

This album wasn’t perfect in my opinion, but I feel like my reasoning is more influenced by personal biases here than in most of my other reviews, just because Y La Bamba happened to trigger some of my pet peeves on this album. I normally dislike interludes, and “Dieciséis” especially feels like I’m listening to a barrier to entry for the next song, rather than an interesting piece in its own right. I have similar feelings towards the outro of “Perder.” Also, “De Lejos,” didn’t feel that memorable to me, and even though it’s definitely enjoyable, I would’ve loved for this mystical and diverse album to have a show-stopping closer, but instead it just ends acceptably, adequately. Frankly, I would’ve preferred if it ended with the penultimate track, “Follow Your Feet.” Despite its flaws though, I’m still simply enamored by the simultaneous cohesiveness and diversity of Mujeres, and I’m in awe of the journey that Y La Bamba has taken me on.